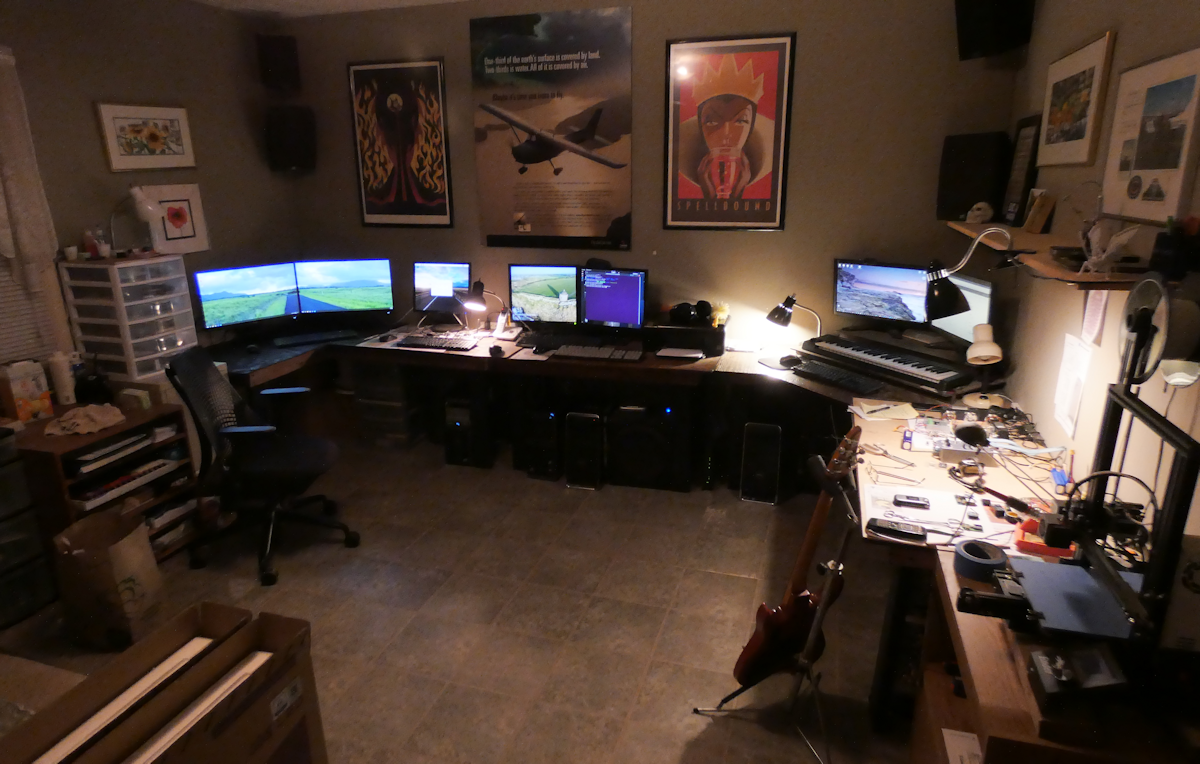 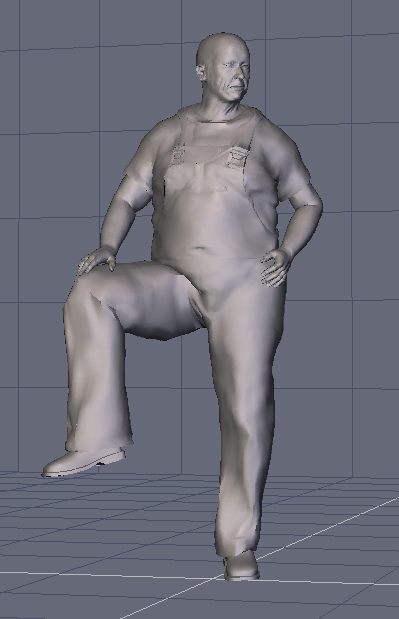 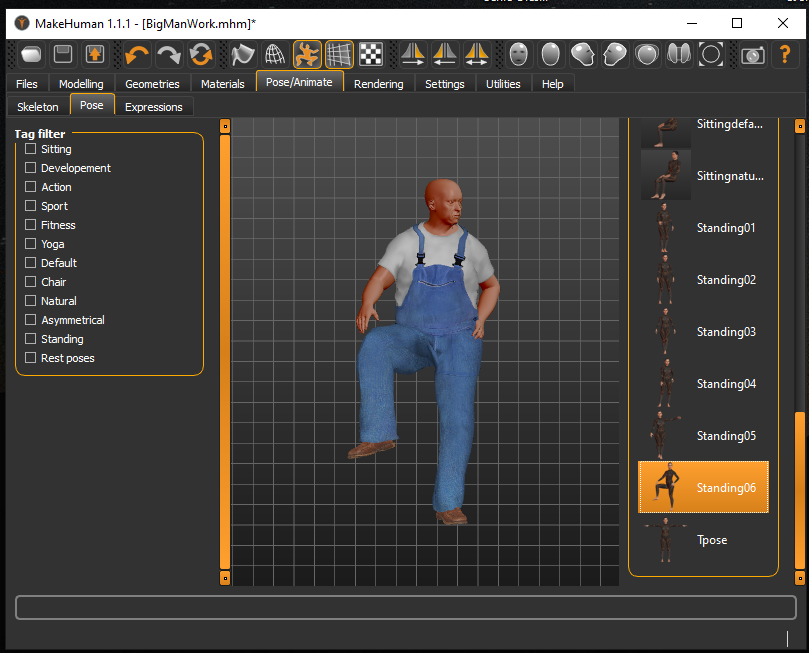 Here is a guy I made in MakeHuman and edited in Blender. He came out quite well and I only had to do minimal changes in blender for the pose. Just adjusted his hands a bit so that they would be flat against his leg and sides. Of course, as usual, you have to edit the head mesh to remove the eye sockets and mouth but using the hide and then ‘select loop’ tool it’s actually pretty quick.

I have zipped up the final OBJ file (obj was a bit smaller than an STL) and uploaded it here: http://martinsant.net/new3d/

This mesh has been tweaked and run through netfabb to remove any holes or openings in the pants and sleeves, etc. I am not sure of the exact scale of the object but I just resize in Cura before I print it. For 1/29 GScale, he is 60mm tall which comes out to about 5 feet 11 inches or so. 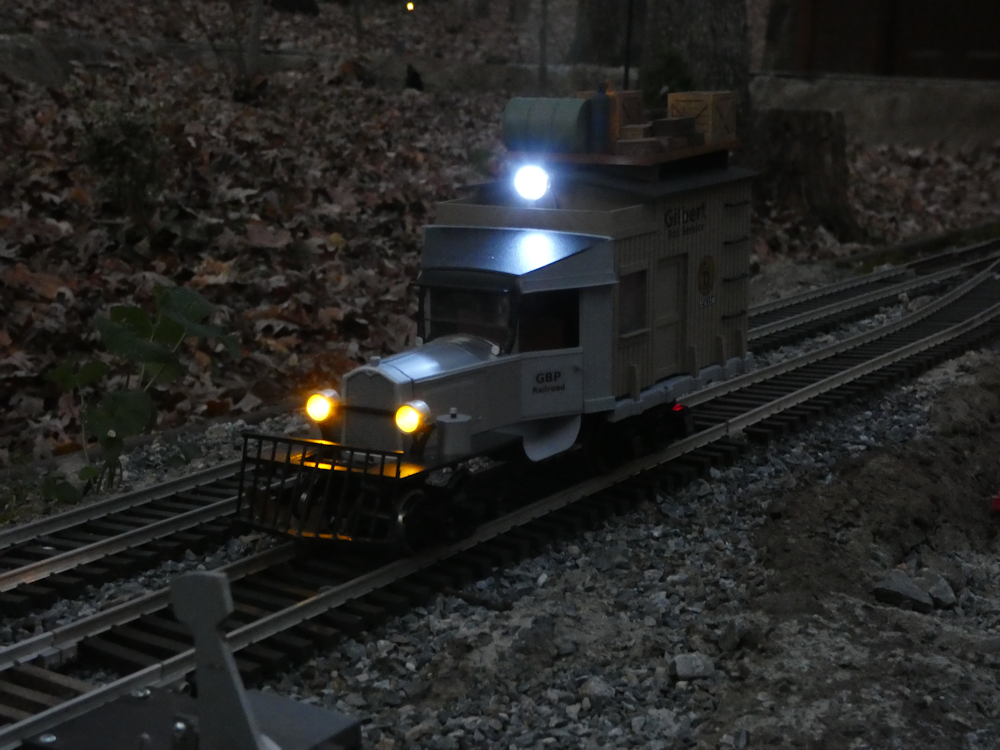 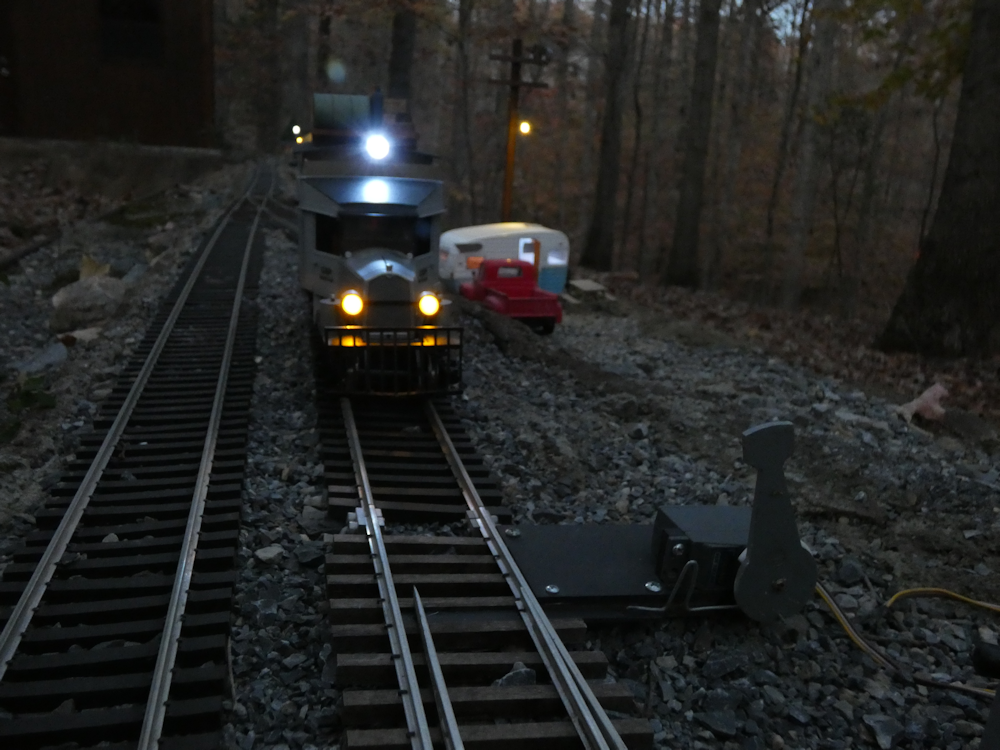 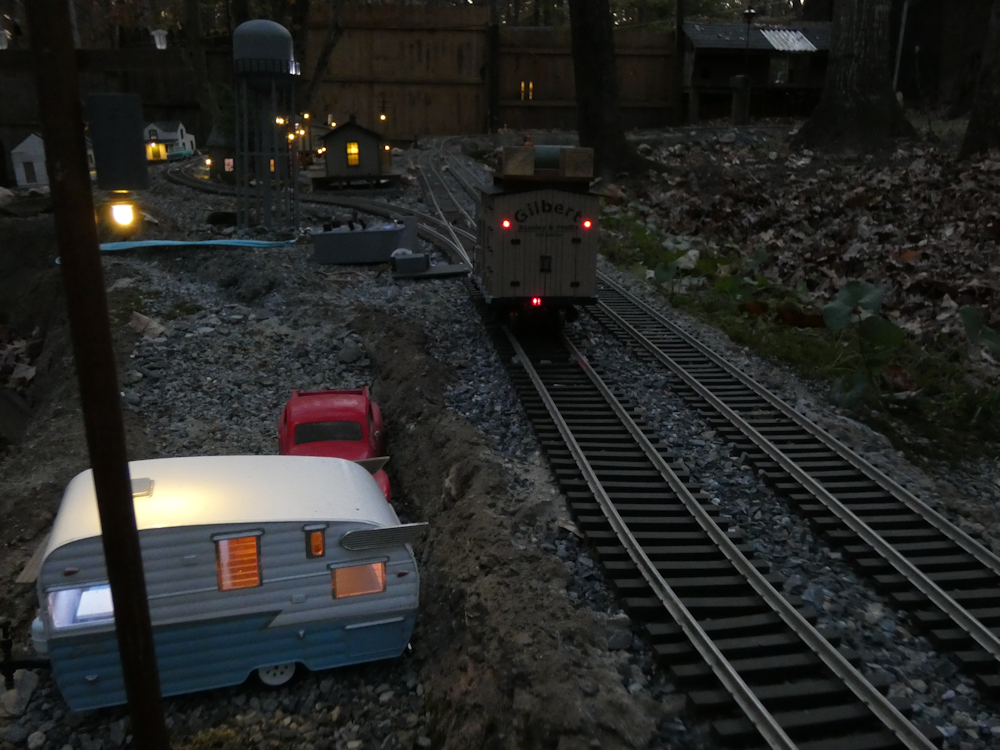 Finally got all the parts happy together. Ended up with a combination of several components I had not tried before- a Pololu 18v7 motor controller plus a relay for the lights. I had to add some code to the PT receiver but I think I will keep that as a configurable option from now on. I tried to use an old soundraxx sierra board but it just didn’t work very well. So I also added an old soundtraxx tsunami which gives the ooh-gah sound but unfortunately only diesel locomotive prime mover sounds. The speaker is a tiny 2 inch visaton-frws-5-r-2-fullrange-speaker, but it sounds pretty good.

Protothrottle DCC Battery for my GP9 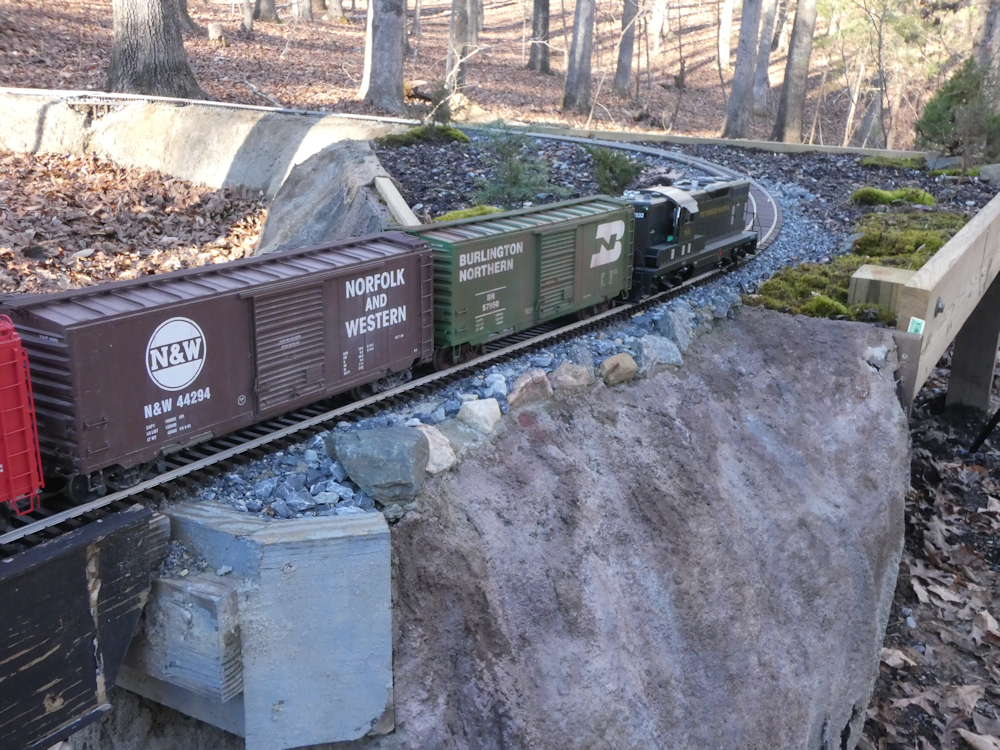 Doing a little running outside today, it was a nice day. My layout is a bit thin, needs some ballast and maintenance, it’s been a tough weather season this year, I have not kept up. 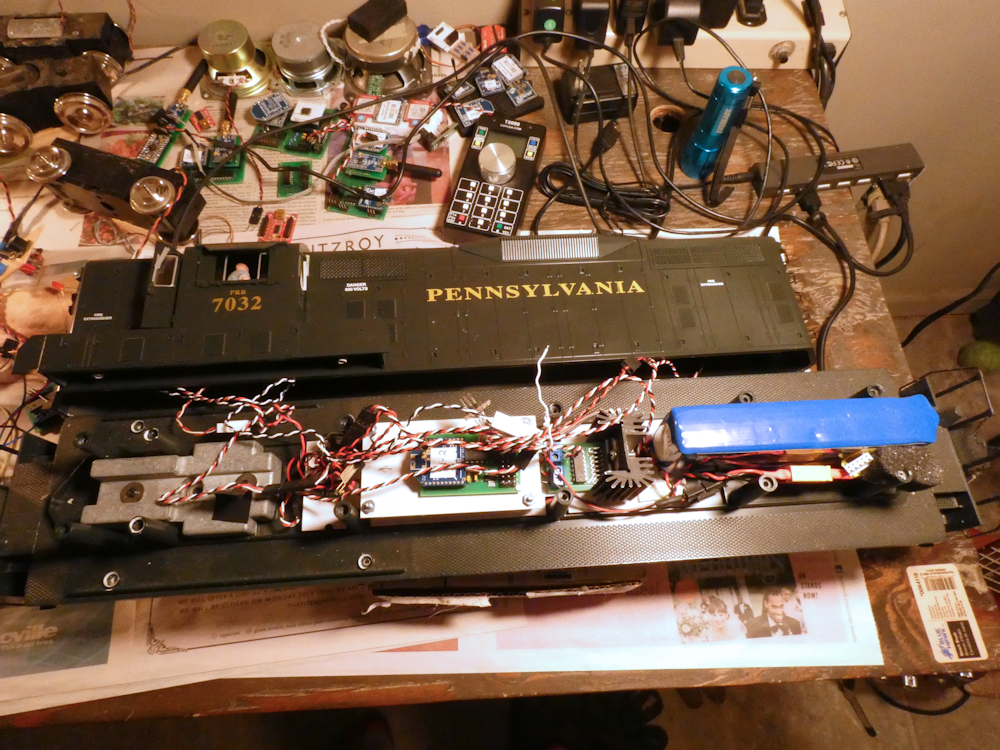 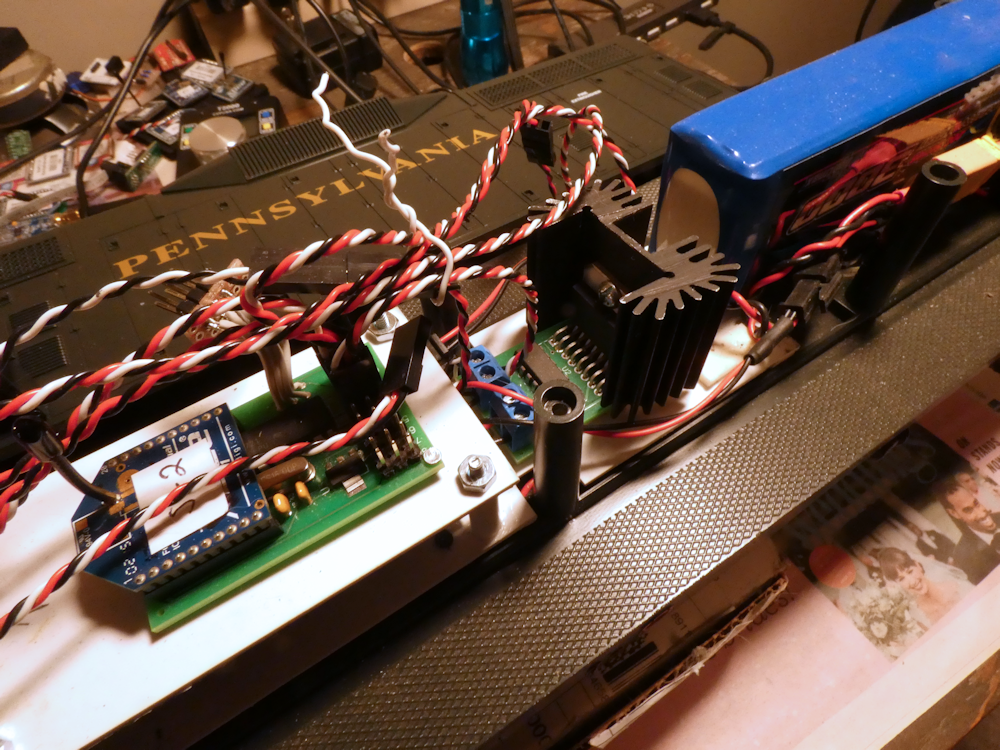 So here are the insides. I like that it’s all self contained, no track power- 3000mah LiPo prime mover, the 5A power amplifier with the big heatsink drives the TCSWow. (You can’t see it here, its underneath the Xbee Receiver)

My receiver board has a standard Xbee sort of foot print for the network chip, it’s what I originally designed it for. Lately I have had a Bluetooth compatible radio chip in it so I could drive my trains with my Android Phone. I swapped that out with an Xbee Series 1 so it would get the Protothrottle network traffic. I coded up some new firmware for the receiver and flashed it into my USAT PRR GP9. Worked really well. I think I have most of the bugs worked out, just needs a bit of tweaking.

I changed the brake on the protothrottle to ‘pulsed’ on F7 for the TCSWow and it works great. I love that brake squeal. I still have lots to do here, the decoder is still ‘out of the box’ I have not tweaked it much at all. I want to configure it with my smart phone, I don’t like the ‘audio assist’ thing much- I have some of that code built out but it will take a while to get it going. 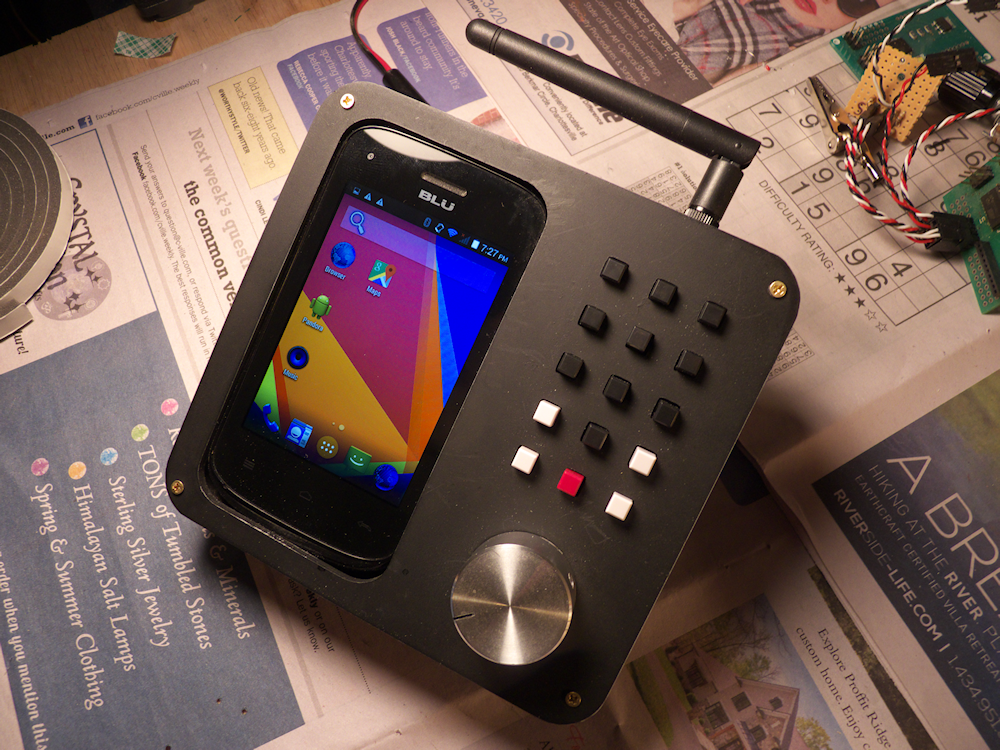 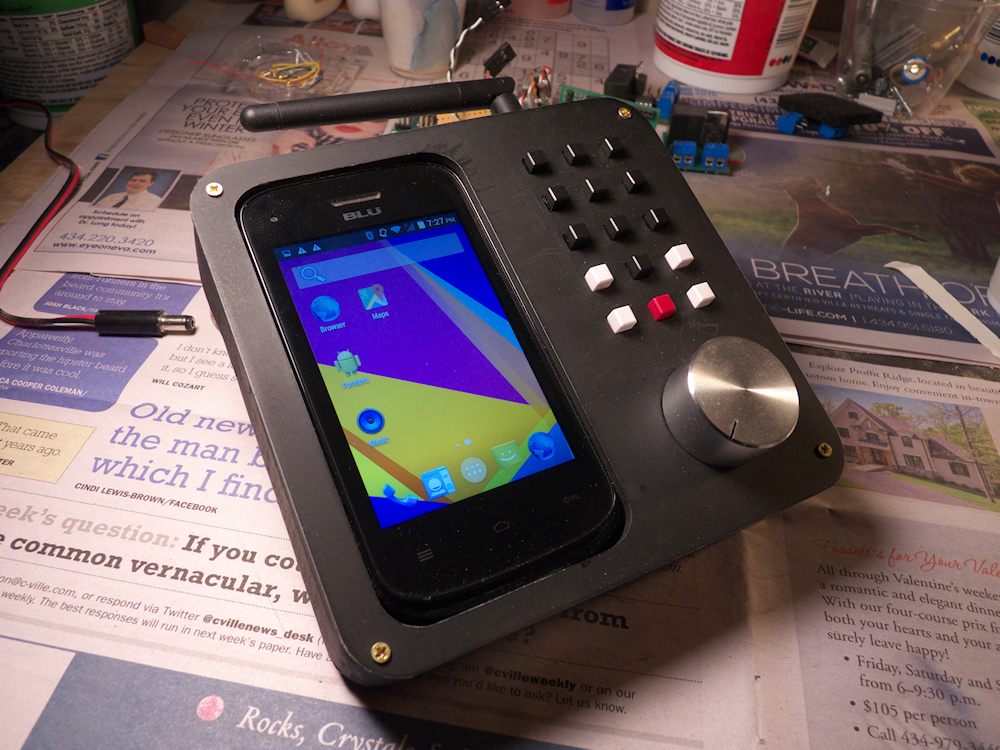 Latest incarnation of the Phone Throttle Contraption. The phone communicates with the Xbee Controller via bluetooth, a custom app runs on the phone. This is based on previous experiments with an android tablet, you can read about that here- Android, Bluetooth and Xbee

I’m trying to emulate a generic sort of DCC throttle ‘feel’ with this. I have all of the base code written and tested, it’s just a matter of pulling all the parts together. Slowly I’m getting everything working.

Posted by admin on January 25, 2016
Posted in: Electronics, Model Trains, Other Stuff.

I picked up a cheap Aristocraft U25B in Chessie paint the other day and have been taking it apart so I can rebuild it. The idea is to get from the toy like unit I have into at least a semi-scaled sort of model. The photo above is the closest prototype image I’ve found to what is depicted with this Aristocraft rendition. So I’m stripping it down to the base parts with the idea to install my control system, batteries and sound. And of course, a bit of paint and detail work- it is a bit cheezy with the cast color parts. Yuck. So anyhow, I’m getting there. Below is an image of the original model. More in a later post. 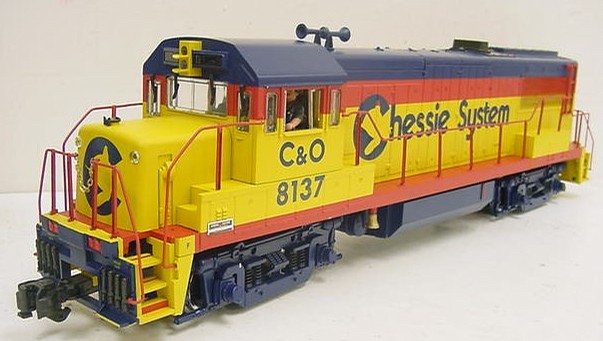 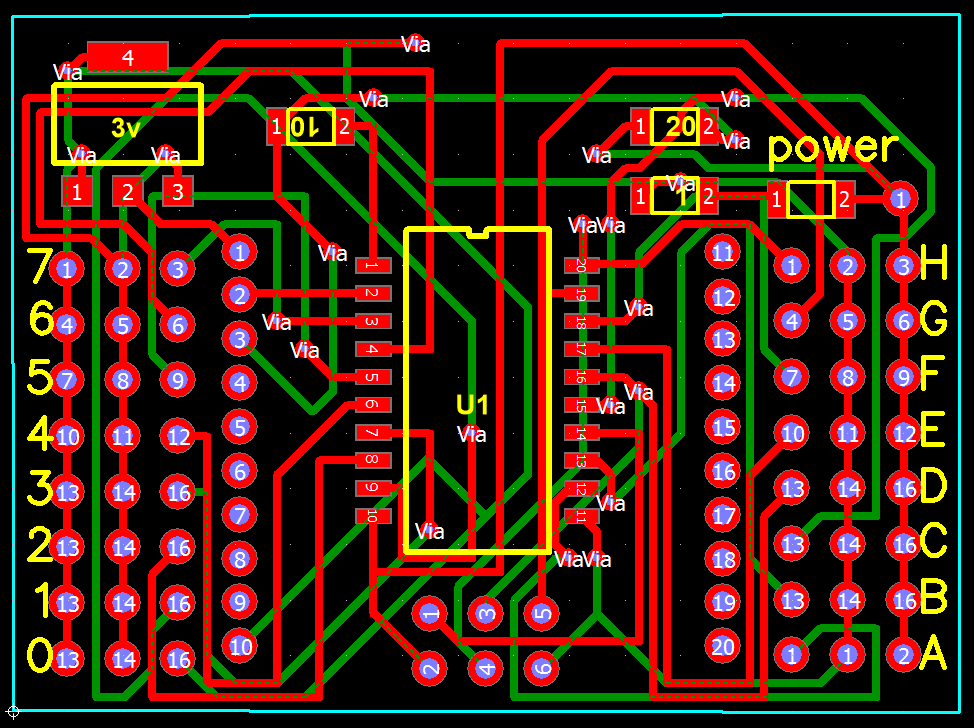 I’ve been doing quite a bit of PCB design these days, here is a version of my controller board, the ‘microwidget’. It’s quite compact. I have not had any made yet but I thought it came out really sort of, well, neat. Like art kinda.

I’m also thinking of making an apt-get debian package to install JMRI on a RPi 2 and gitlab for my code. Hmm.

I think I need a Kickstarter 🙂 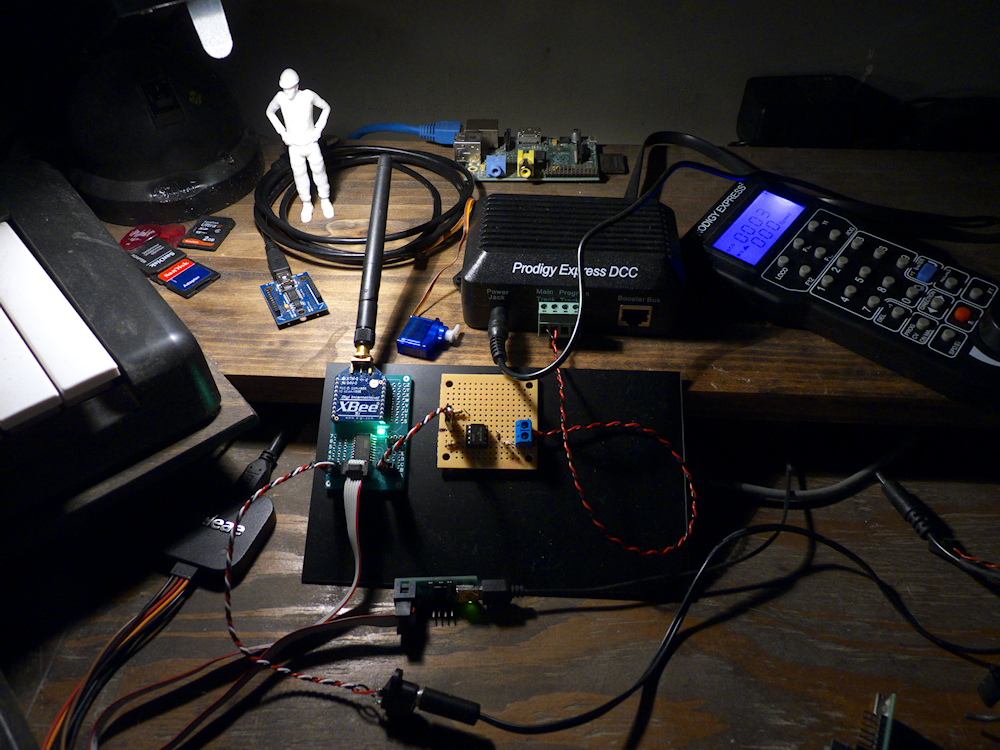 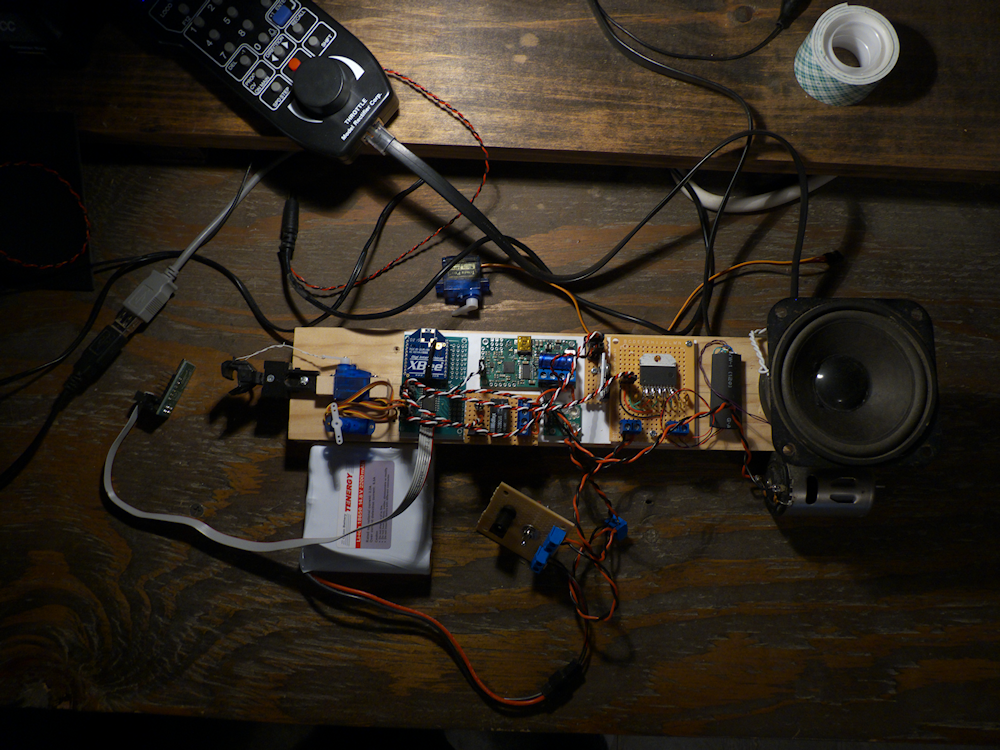 Here are the final two prototypes. The master obviously connects to the Prodigy Express and sports a long range antenna for max transmission power. What I’m thinking here is this is the module that will be connected to my RPi 2 which I am planning on running JMRI on. The Pi 2 will also have a long range wifi antenna on it so I can use it to source web pages to my phone and tablet. My standard handheld design is what I actually use to drive my trains with.

The second pic is the client. This one is fairly comprehensive and has quite a few parts but I use it as my standard prototype rig. In addition to the control board, it also has an (expensive) Pololu 18v7 motor controller and a current sensor. The DCC output stage is the board with the large chip beside the speaker. All it is used for in this incarnation is to drive the Econami Diesel DCC decoder which powers the speaker on the right.

Here are all the parts labeled, you can click on the picture for a larger version-

Well, I didn’t like some things about the DCC output state machine in the last post, the one with the (wrong) zero bit on the end so I refactored it and now it works mucho better. I took the background scan timer down to nothing so it would spit out DCC as fast as possible, this is the trace. The top trace is the rebuilt DCC, the bottom is the output of the Prodigy with just the default 003 loco address, albeit set to 128 step mode. Aside from the lesser number of preamble bits I’m sending they are the same, well within a microsecond or two. I am running this on an Attiny1634R-SU which is the 2% clock. Costs a few pennies more but worth it over the regular vanilla chip which is 10%, a bit loose.

I think the diagram in the last post caused a bit of confusion. Suffice to say I am just breaking apart the components of DCC and the subsequent ‘decoders’. I find the term ‘decoder’ somewhat problematic, I would refer to them as ‘clients’ with the DCC ‘booster’ or ‘cab’ as the ‘master’.

Anyhow, one of the things I do not like about DCC is the power aspect. DCC is sort of a bastard child of both power and data packets which makes messing with it more difficult. I realize that is really important when you carry power on the track but I don’t want to do that. I want the compatibility with DCC accessories and JMRI but I want to run battery power (or maybe steam one day) So I am chopping the power part out and siphoning off the data packets, sending the data out via xbee and rebuilding them on the client. The client takes the battery power, injects that into the data part and out comes DCC. I don’t need much in the locomotive that requires DCC per se, except possibly sound but I am interested in choosing routes via something (JMRI?) and setting turnouts (accessory decoders?) and signals and things like that too so I want all this to work.

Oh yeah, another aspect of DCC I’m finding I don’t like is the slam-bam sort of thing. Well, ‘not like it’ is relative I suppose, it’s probably the easiest one and most ‘organic’ of the protocols. Constantly send everything as fast as possible and you are at least sure some are getting there, right? So I’ve also, sort of, modified this at least over the air. This keeps network traffic low. I currently have only one priority queue in the master, I think I may have to expand this to two later one. A ‘hi’ priority for the locomotive situations and a ‘low’ for other things? Dunno yet. 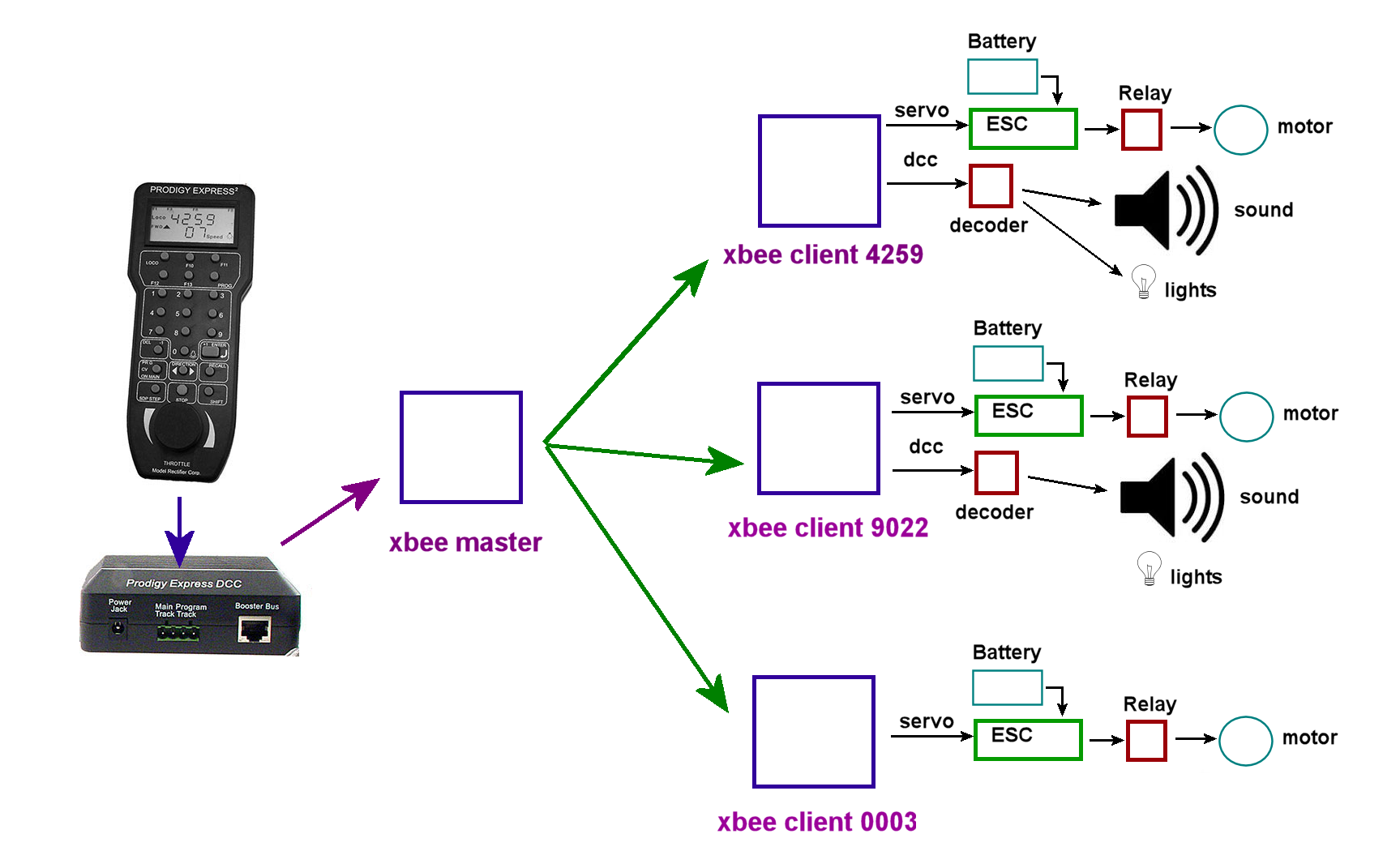 A diagram of what I’m working on. Not shown is my prototype battery powered handheld, it would be (in addition to or to replace) the master in this diagram. 300ft range between the master and any client node, 250kbs.

I have about 80% of this working as indicated. I’m still coding up the Client DCC output state machine. It’s almost there but I think I’m off one bit at the end of the message. Hmm. Also, I have not yet tested the LMD18200 driver that will power the DCC out to drive the decoder, so that’s another step.

The weak link to me is the purple arrow between the prodigy and the base station. Right now, I have the cheap express unit, so it’s that thick telephone sort of wire. But from what I’ve read the wireless unit only has about a 40 ft range? Not so good. That is where the proto handheld I’ve built will come in. But that’s another project.

The whole idea of all of this is to be as transparent and fast as possible. DCC in at one end, it pops out at the client with only a small delay. How small? I’m hoping 10ms or so but that’s probably optimistic and will depend on the traffic. Lots of experimentation and testing to do but so far so good.

So this is the trace. The upper signal is the generated DCC waveform out of the client microcontroller. The lower waveform is from the Prodigy Express. Same message, skewed a bit, the top trace is about 1.5ms to the left. Look carefully and count the pulses and consider the widths, see how they are almost dead on except for that last bit? Hmm. Oh that will drive me nuts until I fix it!