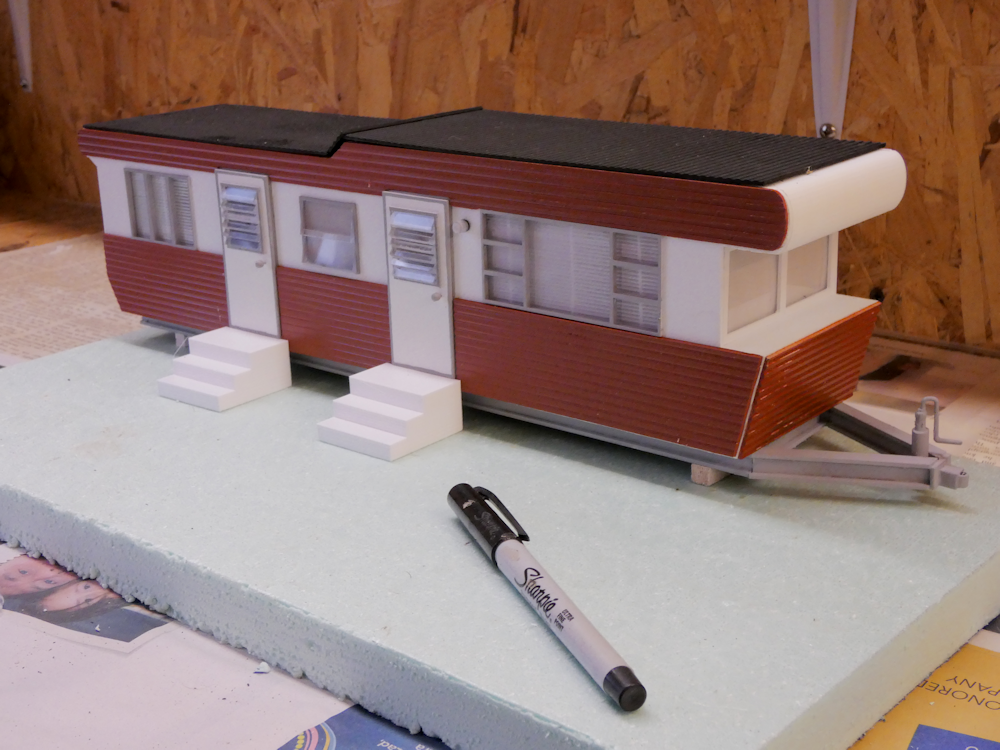 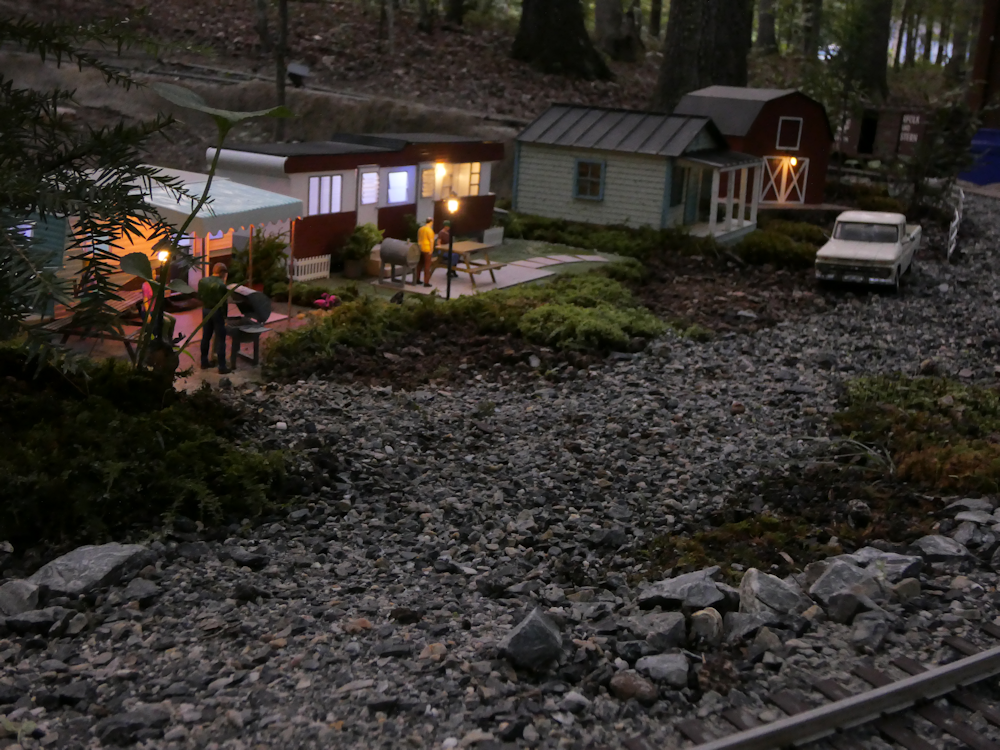 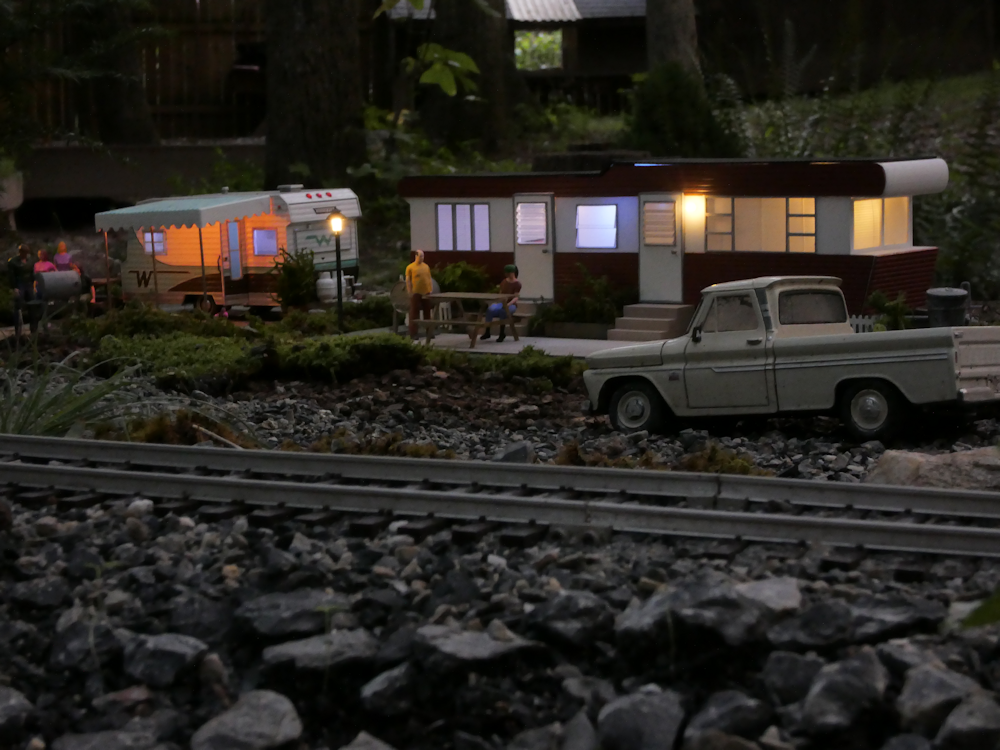 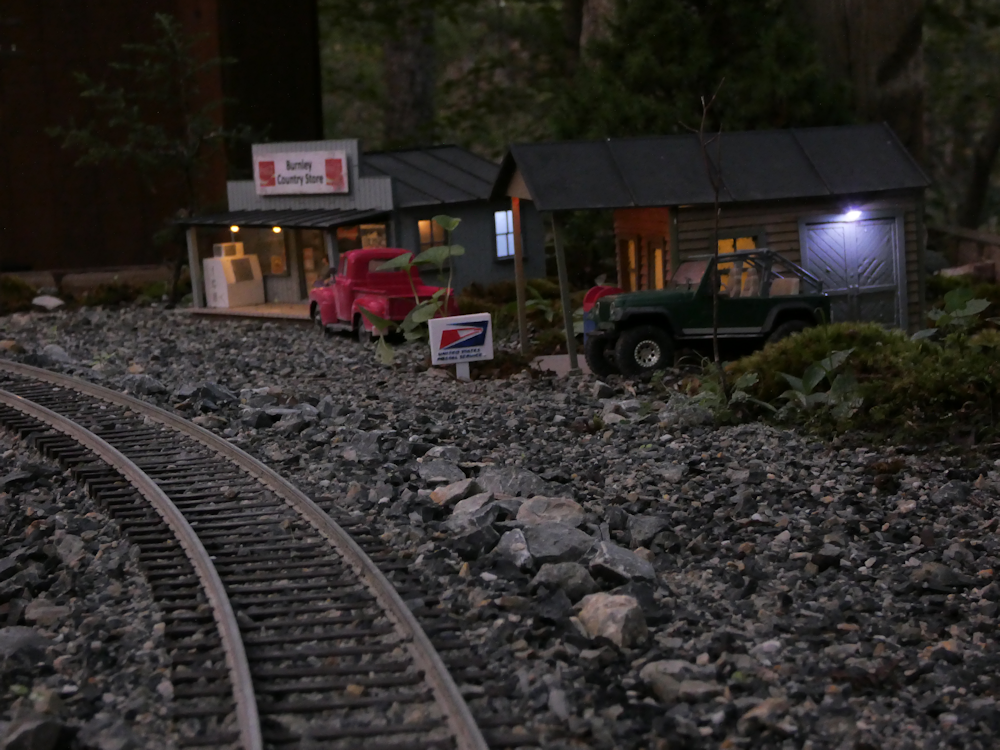 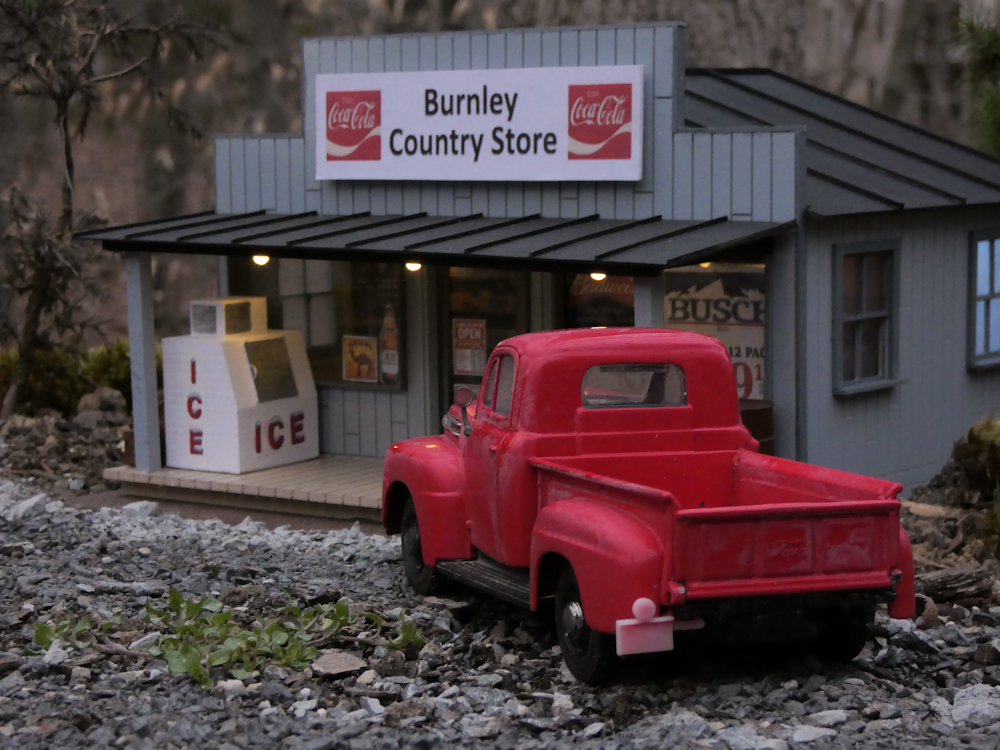 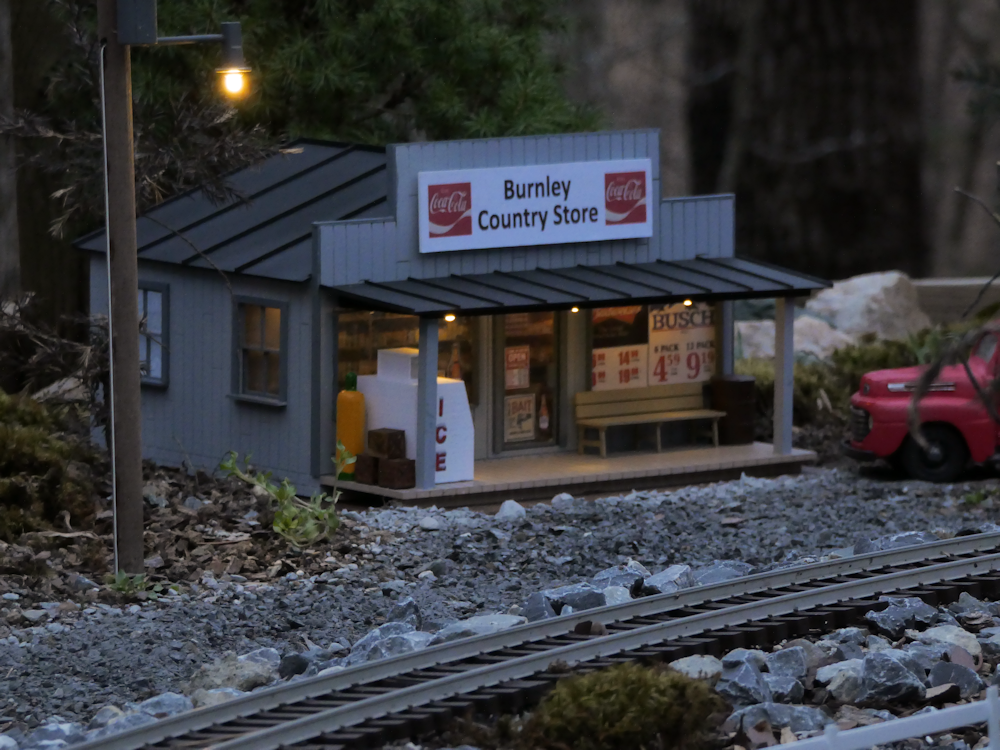 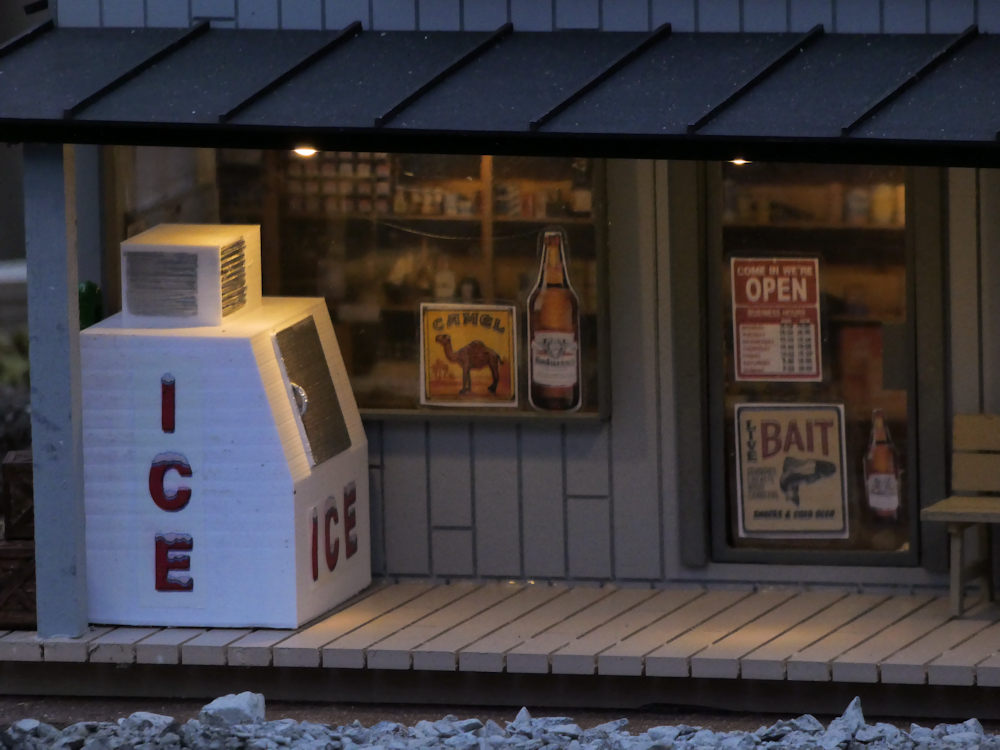 I seem to have a lot of time on my hands so I decided to construct a country store for my little town of Burnley out on the Layout. This combines the basic construction method I’ve come up with using the CNC with some 3D printed detail parts I got off of https://www.thingiverse.com/

Everything is colored with rattle can spray paint and the details and sign were printed on my good ole HP Photosmart ink jet. Generous amounts of matte spray (clear) finish were applied to the structure and each of the posters and signs. It got it’s first steady rain last night and still looks crisp, we will see how hard the weather is on it over the next few months. 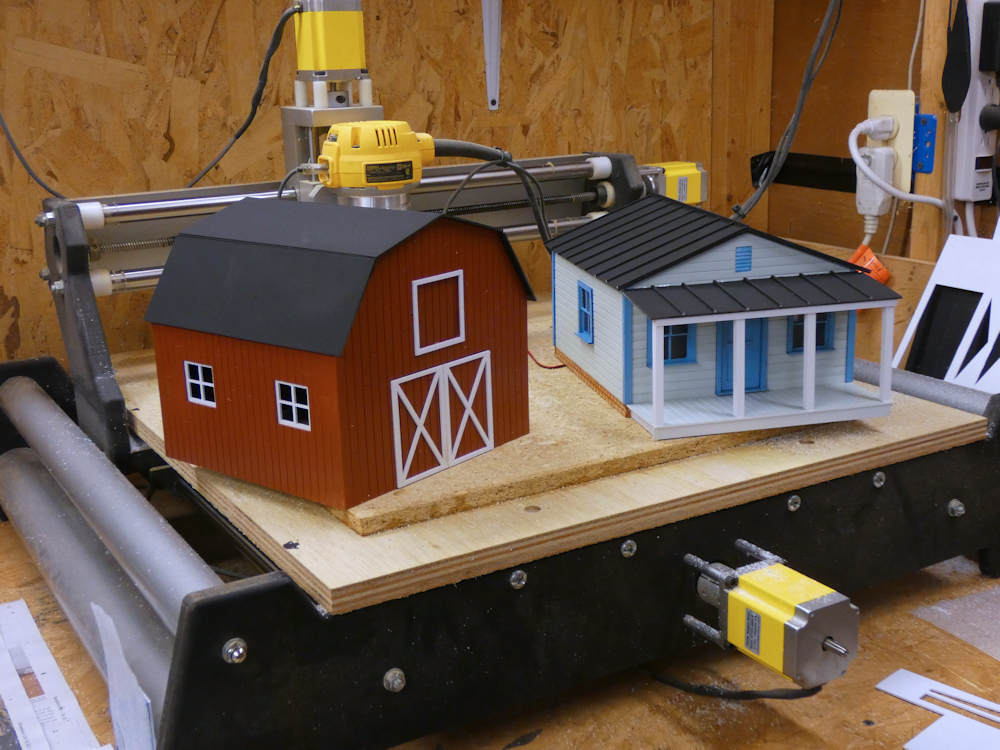 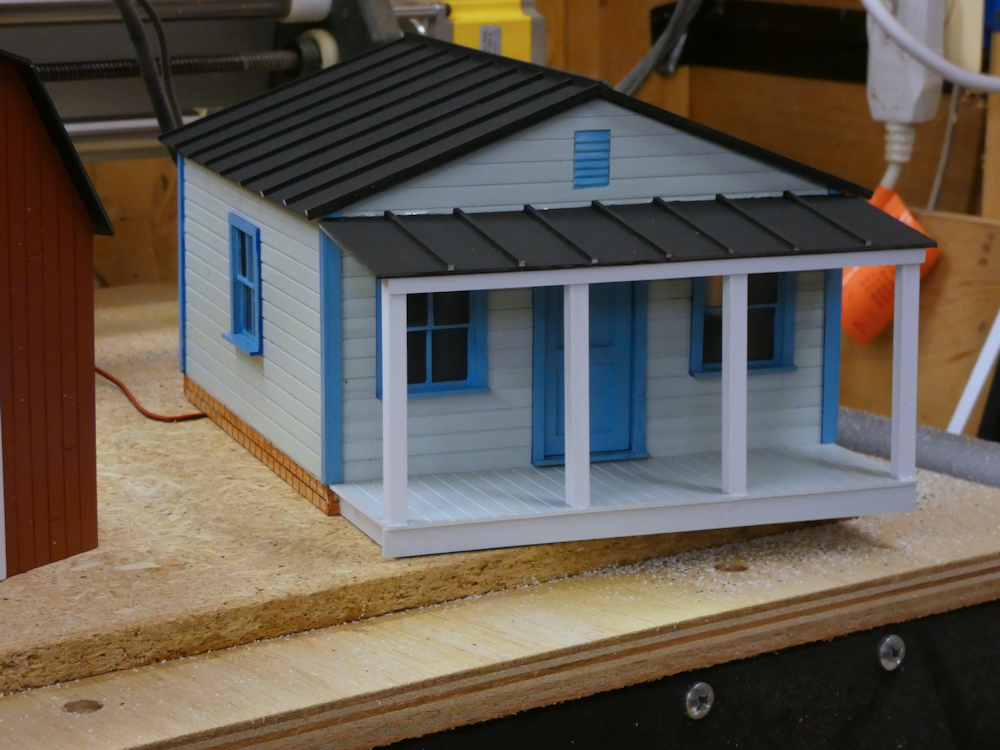 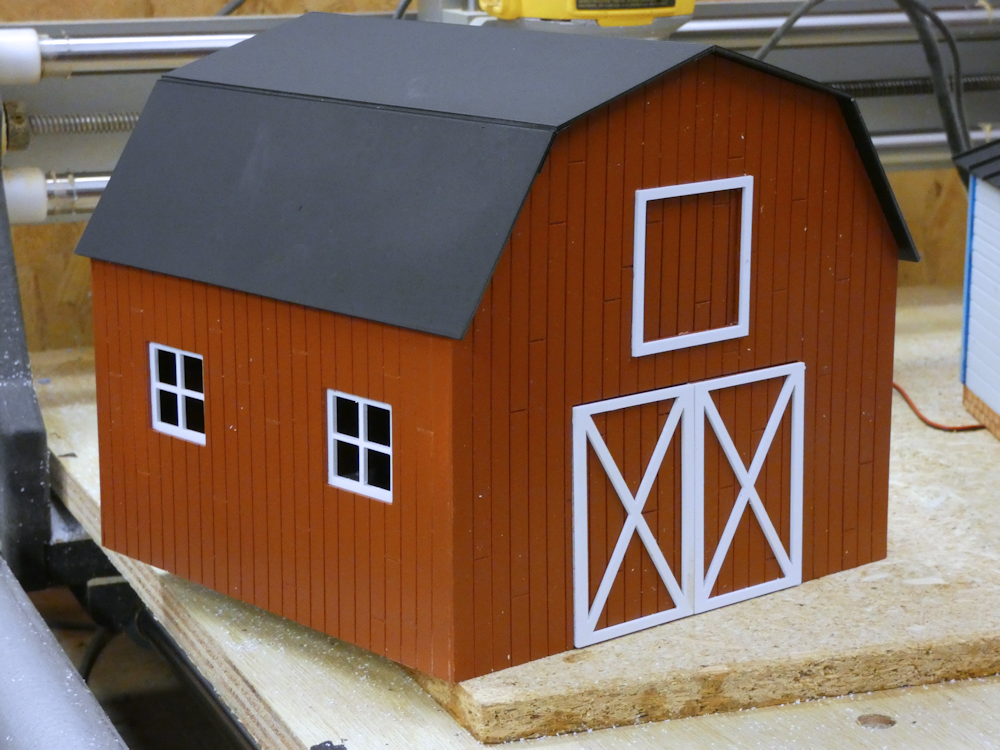 Finished (more or less) my farmhouse cottage and a small barn. These will go into the Burnley area on my layout. The Barn needs some outside lighting and a few details, the house is all wired up but needs to have the windows frosted. 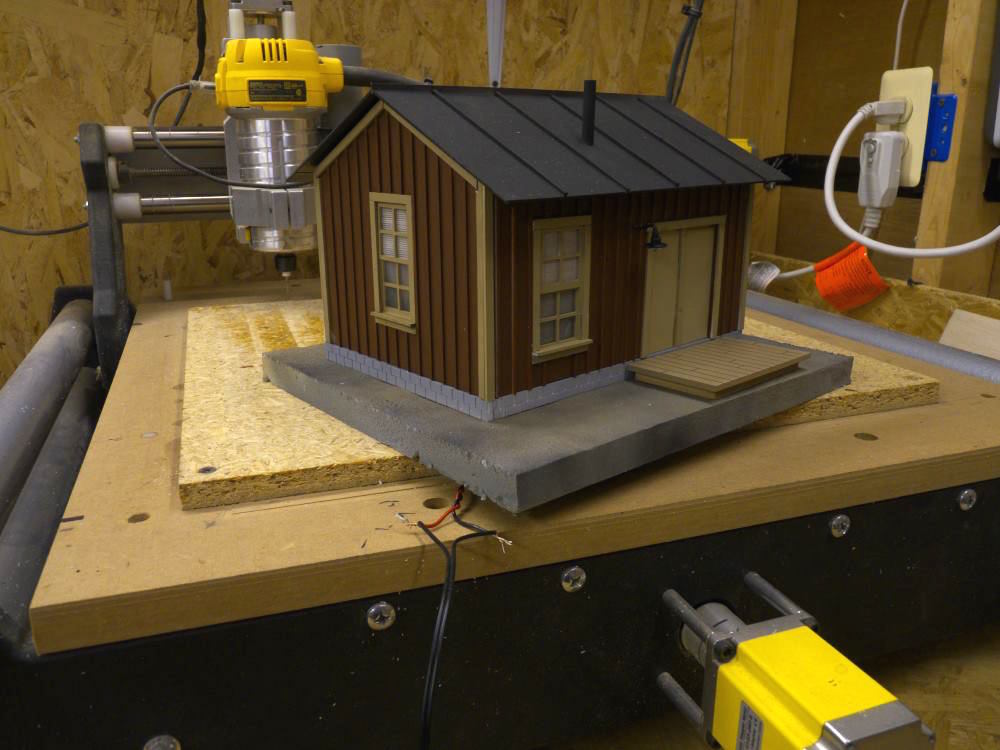 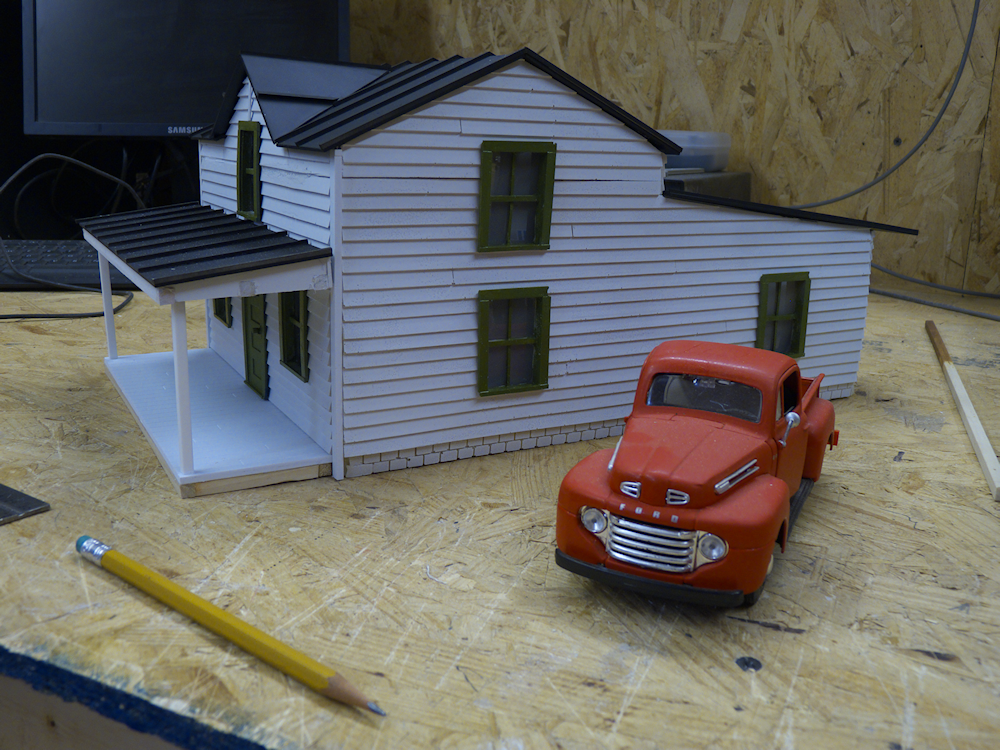 My new Farmhouse. All of the infrastructure was cut out on my 3D router using .060 and .120 sheet styrene. The siding and windows are resin castings. Not quite finished, still needs some details and lighting but it’s almost there. 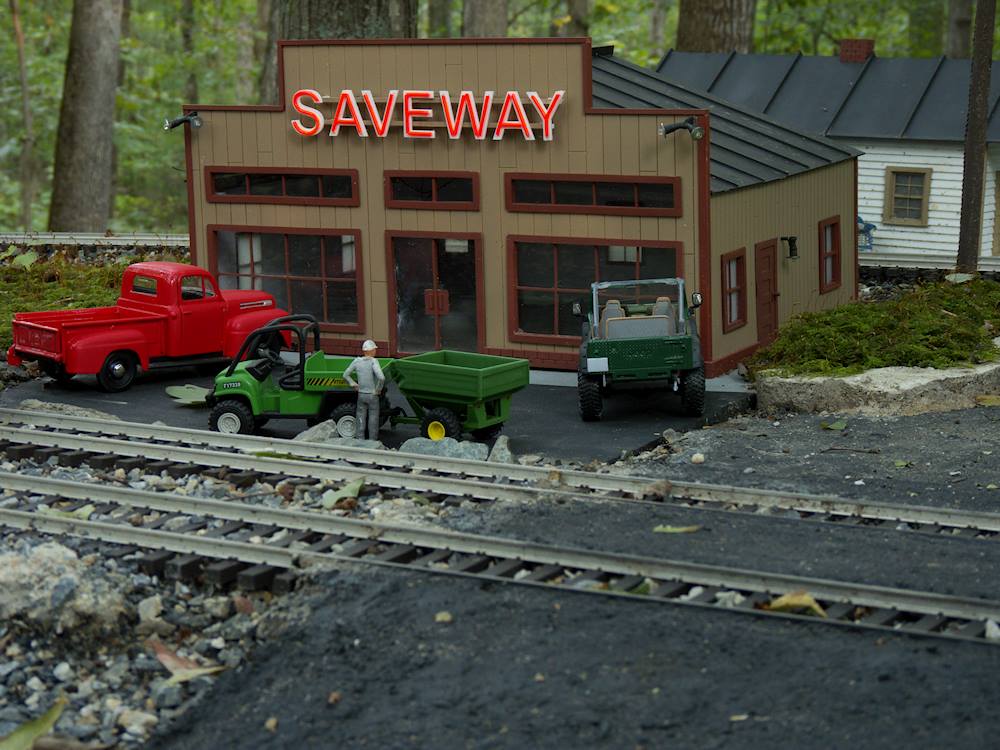 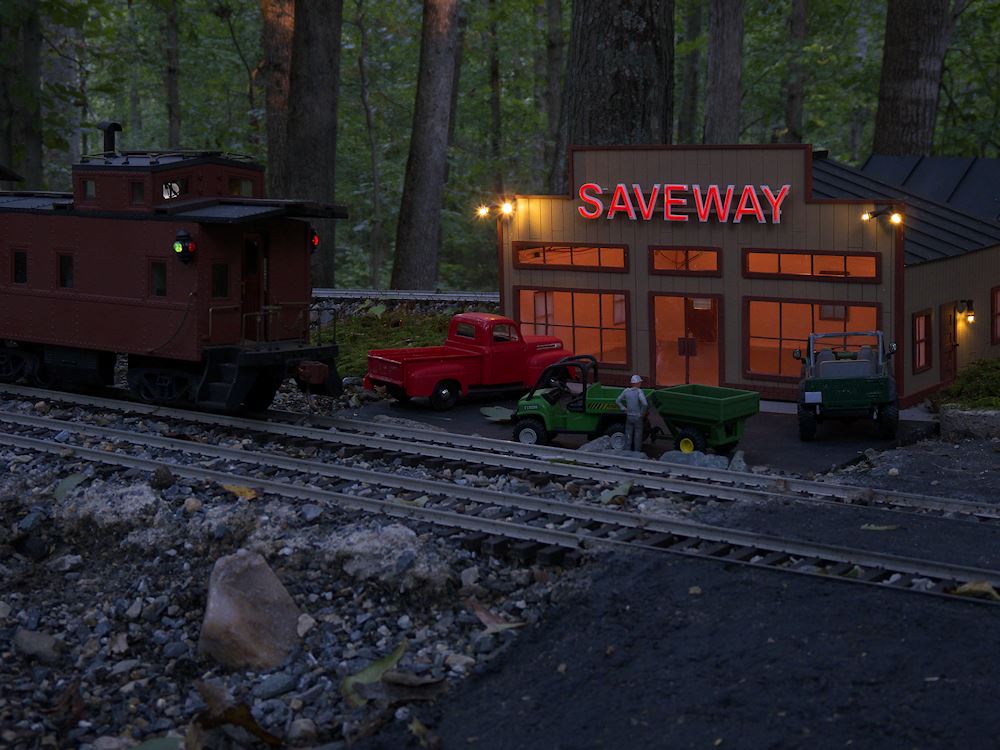 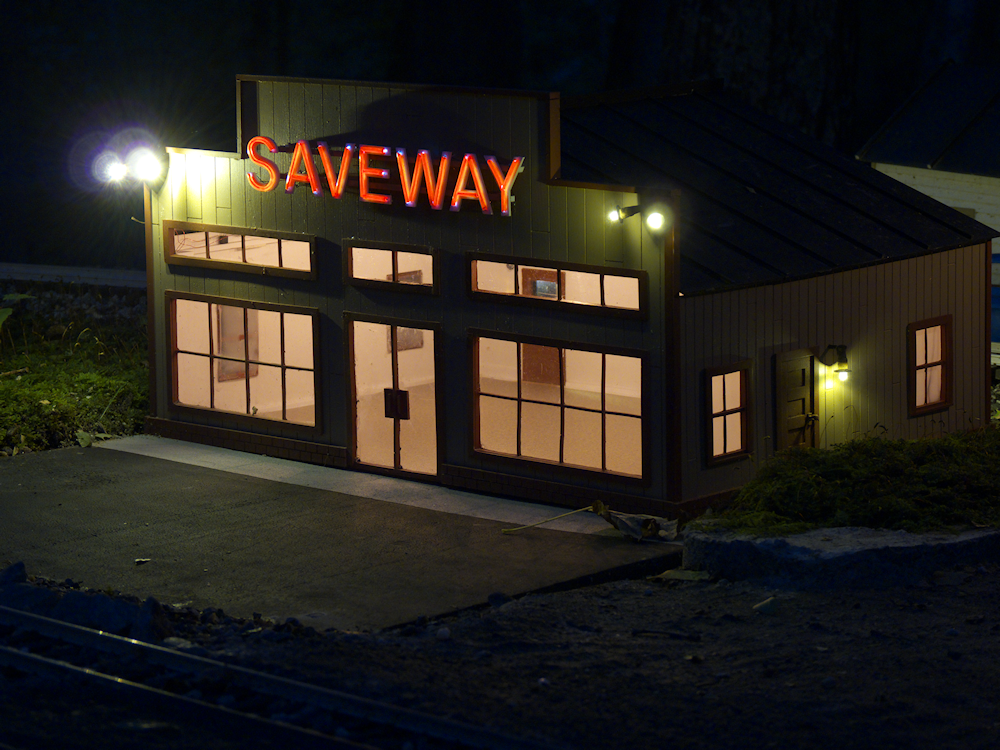 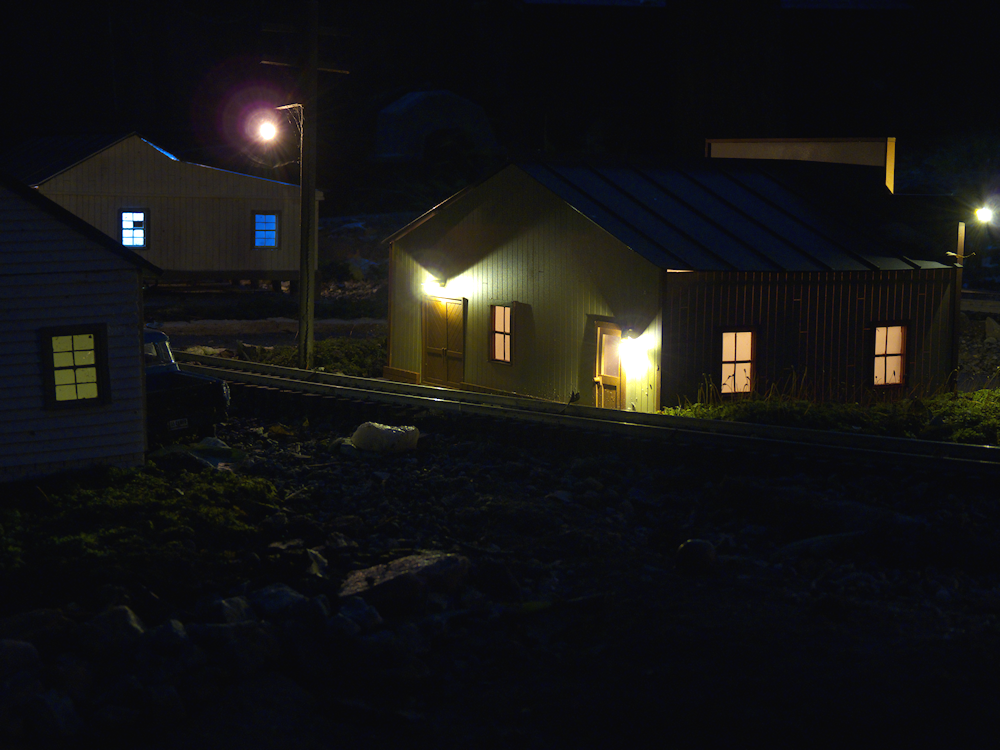 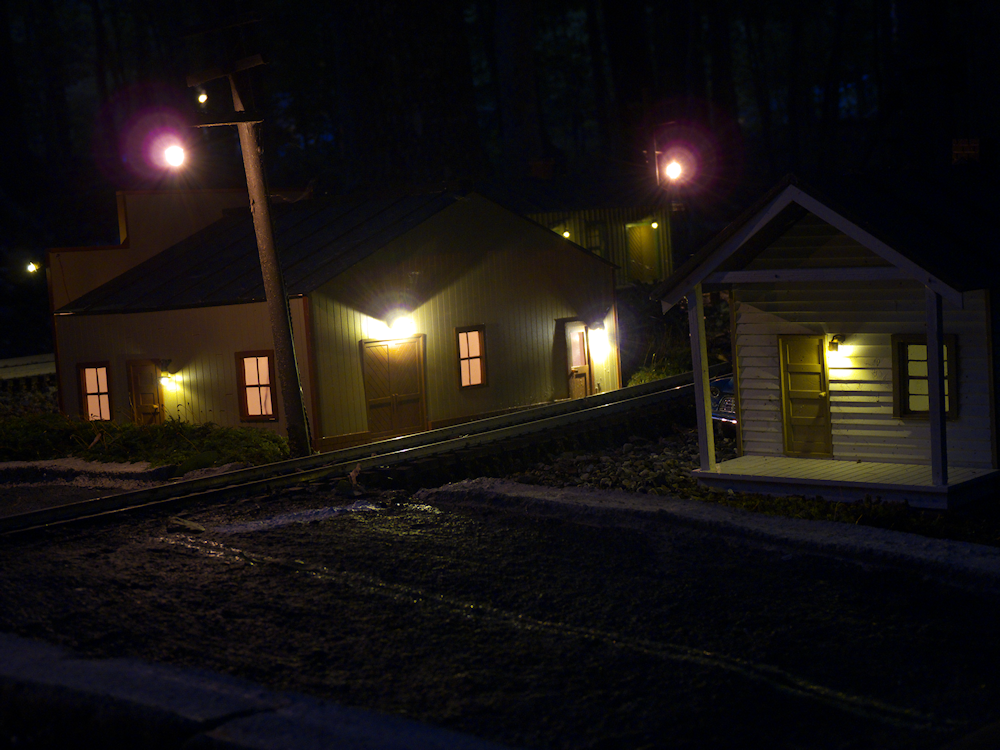 Finished off the grocery store. Well, almost. It’s hooked up to power out in Gilbert, but it sorely needs an interior with those big windows. Also the interior lighting is bulbs, way too yellow for my tastes so that will be replaced. The ‘neon’ sign came out ok but it was bitch to get together, lots of little fragments of EL wire. 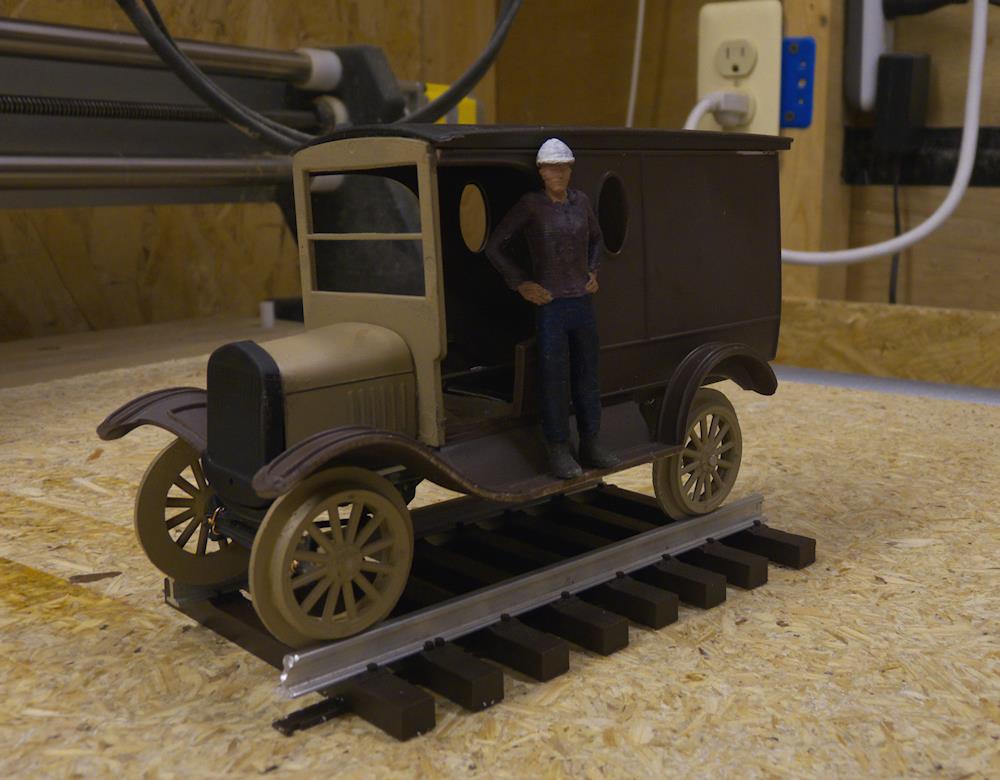 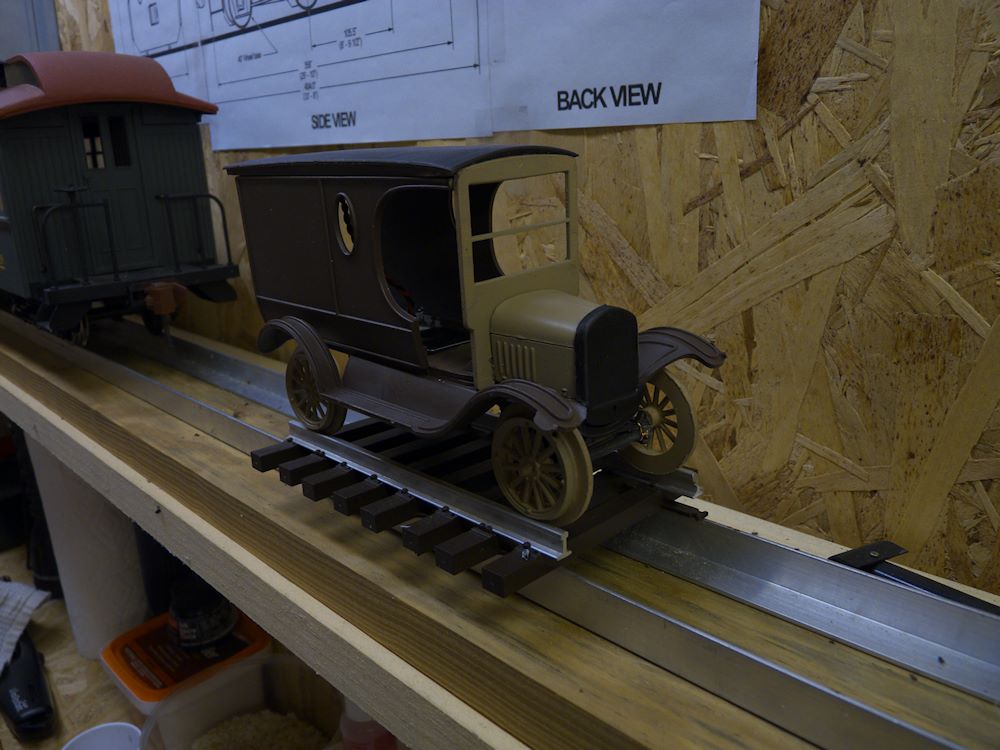 I also got this little rail truck together. Made from an off the shelf kit and a little ‘robot’ transmission I got from pololu.com. Does ok, good speed but a bit noisy. The flanges on the wheels are not quite right, too square. It does well on straight runs but jumps off the track when going over a switch. Oh well, more engineering to get it tweaked right. 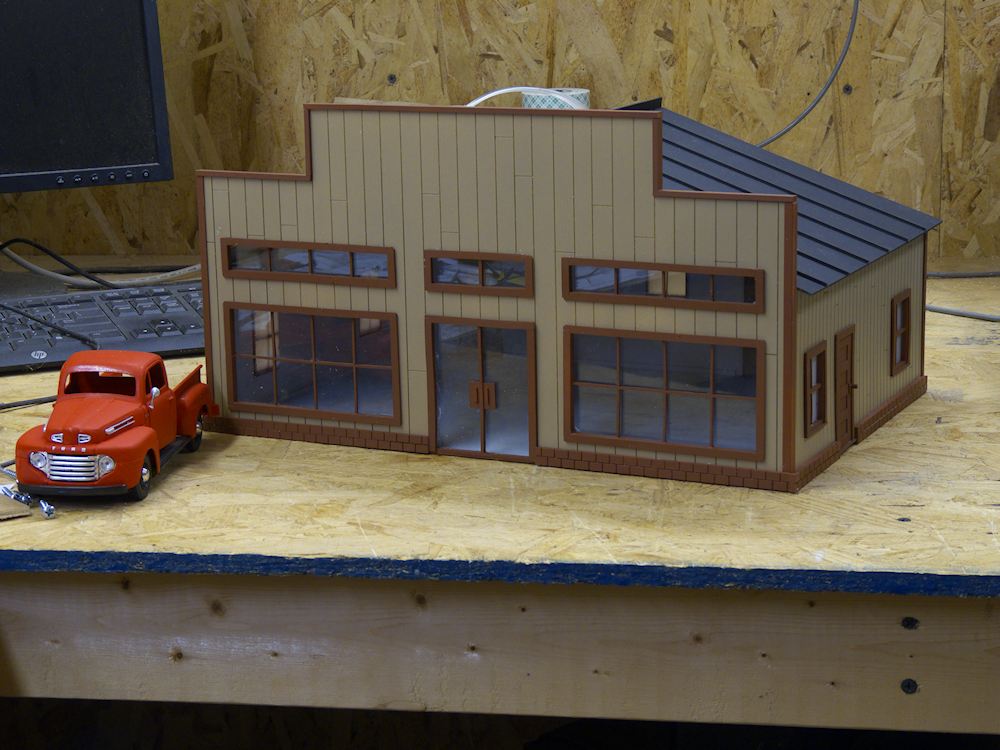 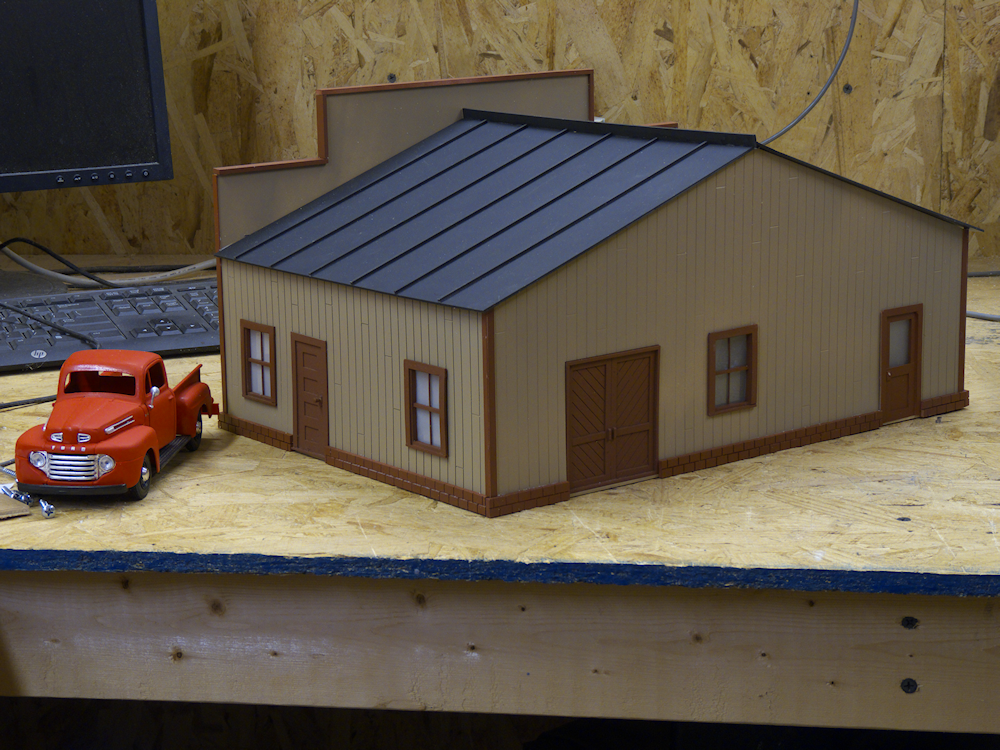 So here is the General Store/Grocery for Gilbert. This is from an older design I originally did in wood. Alas, the wooden one fell apart pretty quickly in the elements so I made this one from styrene sheet using the same patterns. More or less.

This is only the shell, I will need some detailed lighting and an interior with all that glass on the front, looks pretty ridiculous empty like that, eh? But I plan for this to be the centerpiece of Gilbert so it needs some work. A neon sign perhaps, lots of lights. A small parking area.

Here is a video of the router cutting out some of this: 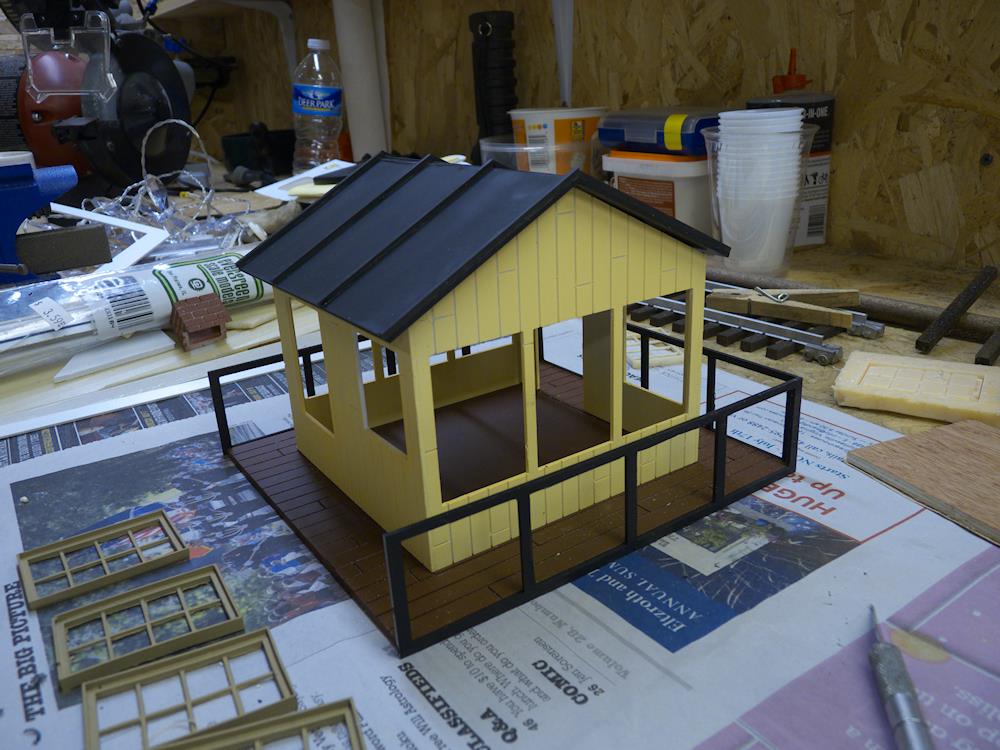 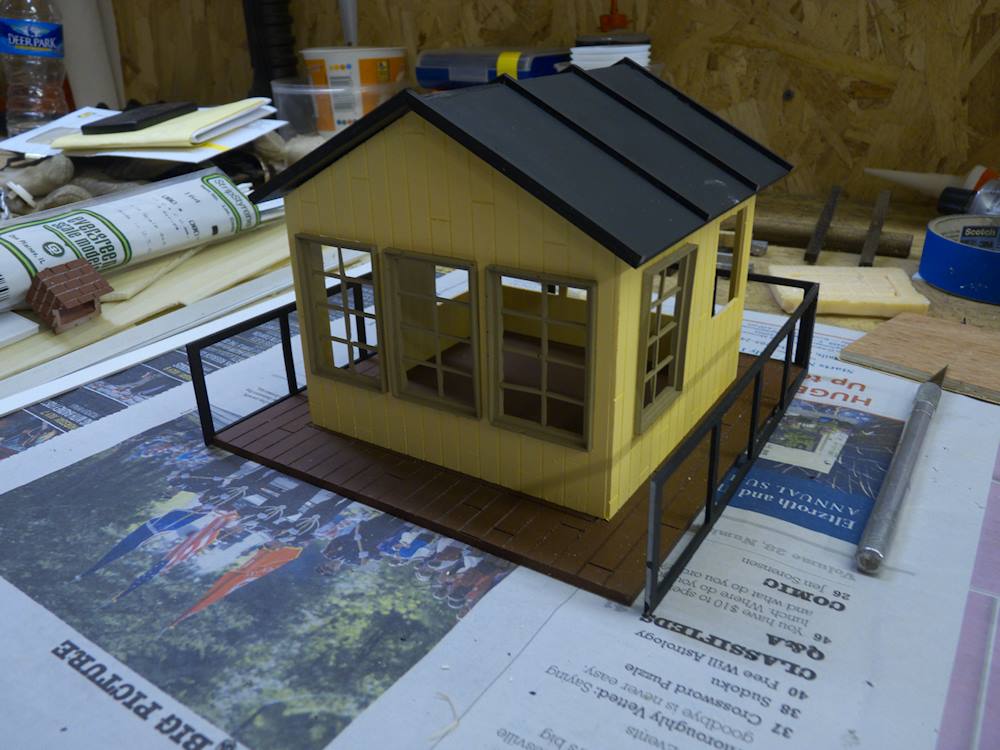 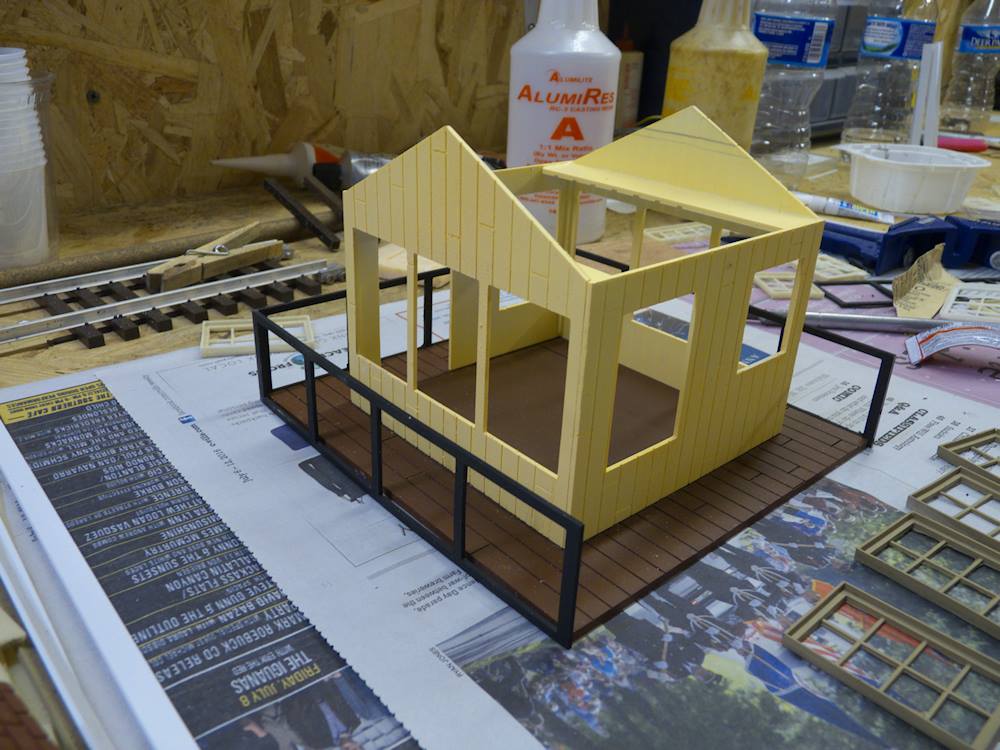 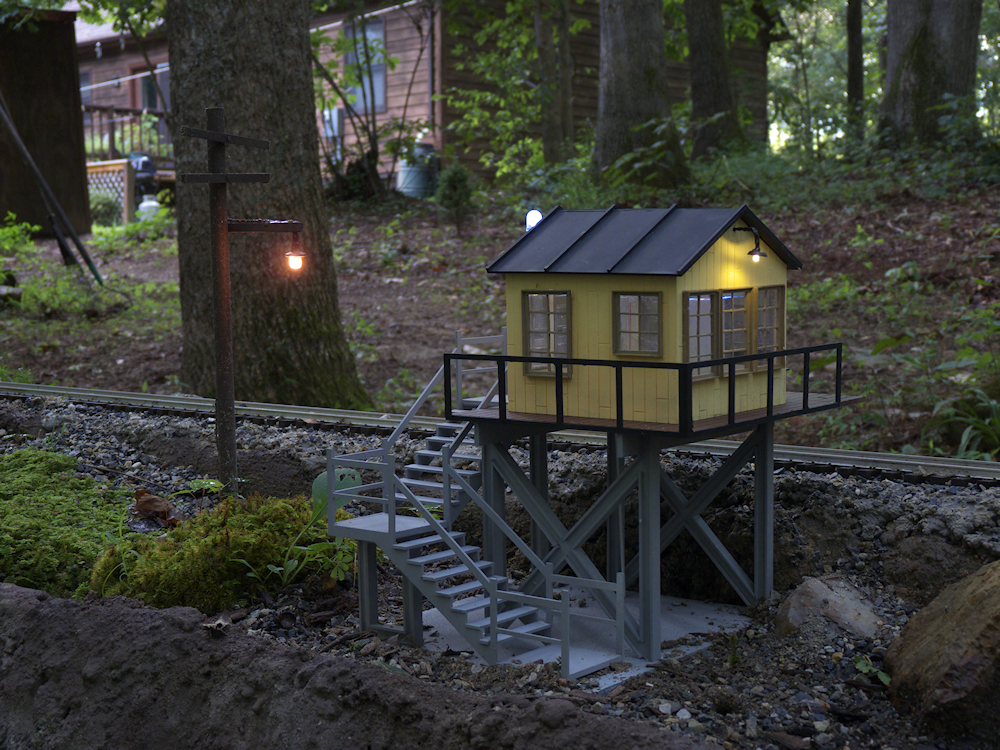 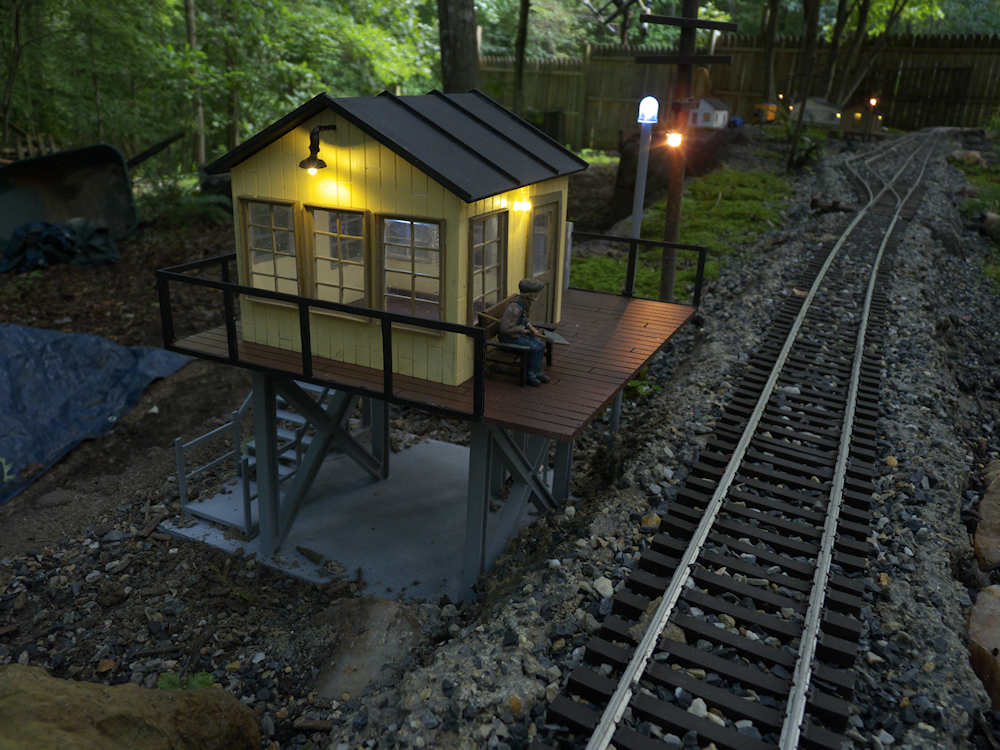 My new building. Everything is cut from sheet styrene on my Probotix X90. I do love this machine and working with styrene. It cuts like butter and you only have to run the router at about 7600 rpm so it’s pretty quiet.

Anyhow, this is a tower sort of depot near the south end of my bridge. It’s on stilts, With all the windows I’m going to have to make a decent interior, frosting the windows is not really an option I don’t think. Work in Progress as is everything.

Peoples for my Porch 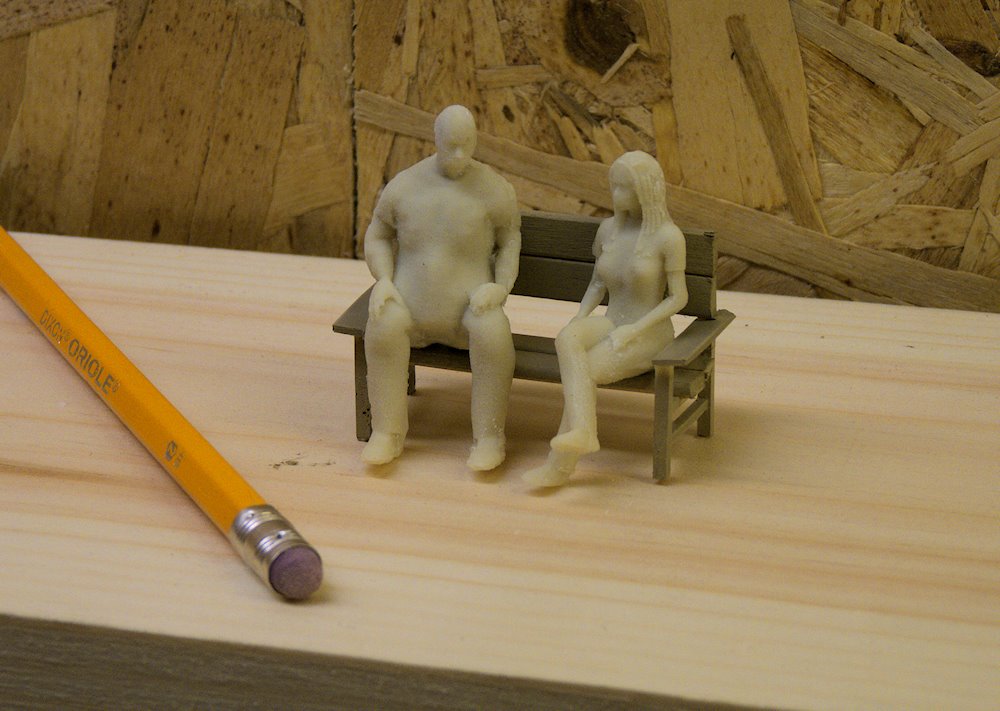 Here are a couple of people I’m working on for the porch of my shotgun house. The originals were 3D printed, then I made molds from those. These are resin cast from those. Casting resin seems to be an art form unto itself, it’s difficult to get a perfect cast. Bubbles in various places produce voids, frequently in the face and feet. These came out pretty well though. Just need to clean them up a bit more and do some painting. 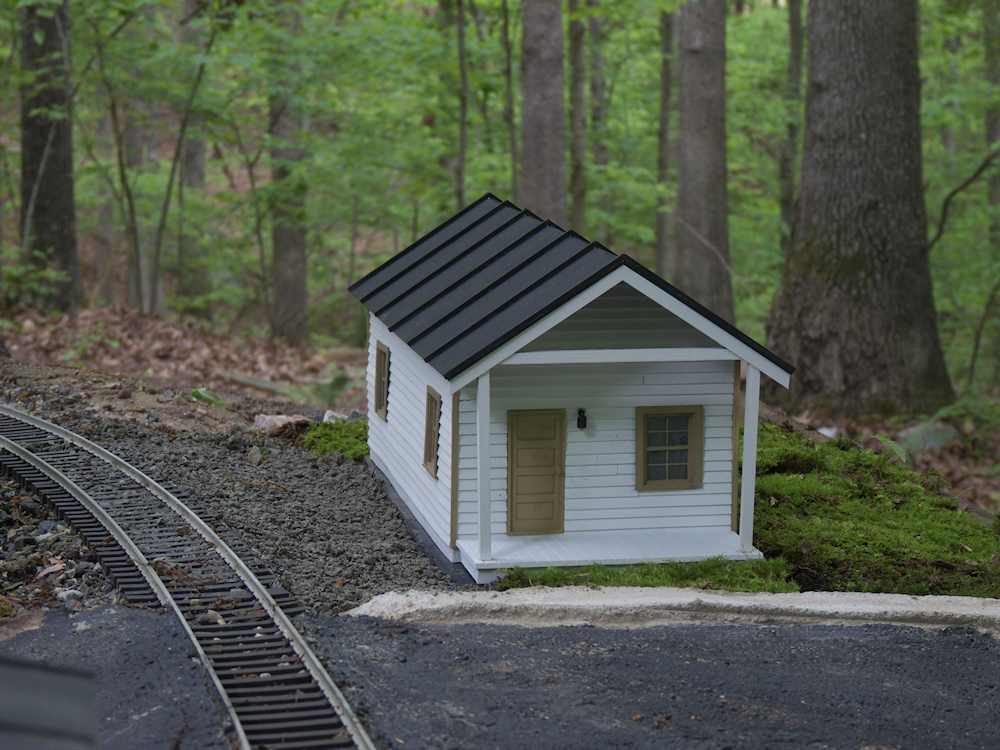 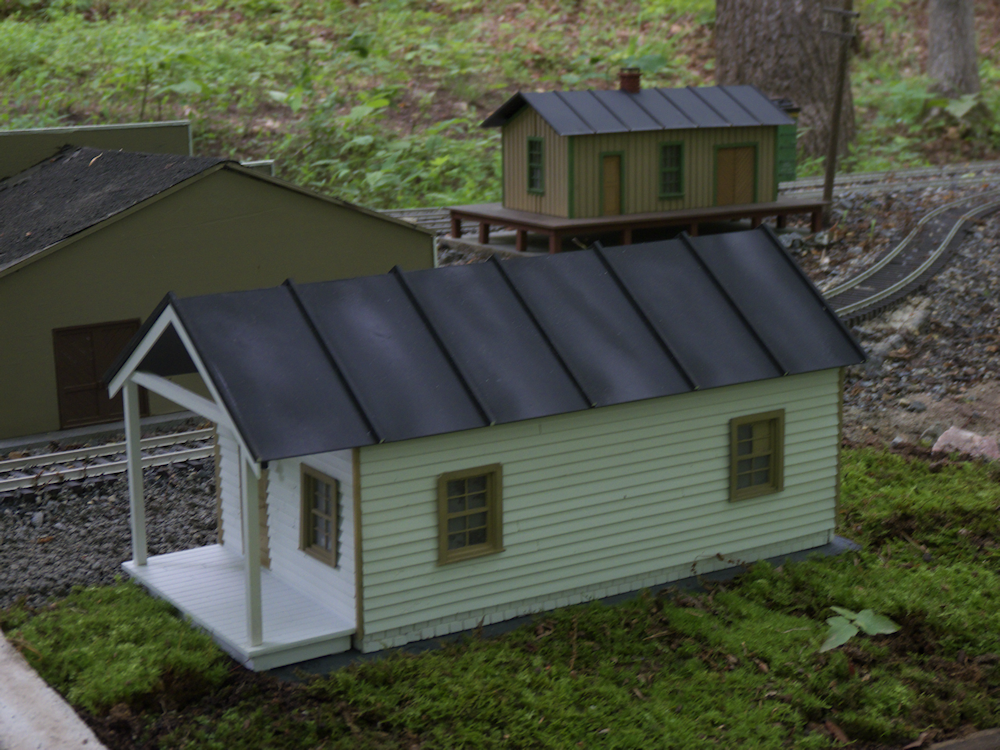 Here is my ‘shotgun house’. So called because you could shoot a shotgun through the front door and out the back without hitting anything. These were very common in the early 20th century, easy to build, standard lumber sizes, reasonably cheap. Often used in ‘company towns’.

Anyhow, this is my take on one. The sides are cast resin, I made two masters using (many) strips of .060 styrene to get the siding effect. Those were used to make two rubber molds, one with the brick base and one without.

For the house, I poured three of the brick base and one without, then cut them out on my band saw. The windows and door openings were cut on my X90 3D router, (cured resin cuts very much like styrene it seems, sweet). The floor and roof are just straight cut styrene sheet ‘score and snap’. The window and door inserts are also cast from resin. Everything is painted with rustoleum flats- brown, white and for the roof, black. I have it wired with white LEDs inside and on the porch but don’t have 12v out in the garden yet. Soon.