I think I’ve finally gotten to a beta release point on my Phone App and Widget Firmware. The firmware is universal but the phone app is customized for the Soundtraxx Economi DCC decoder. This app lets you control and program a battery powered locomotive via wireless DCC on your Android phone.. Above are the four screens. Some of the controls, the couplers in particular, are not implemented quite yet, or are implemented but untested. Everything else works. The coupler buttons are intended to control servos to actuate the couplers ala switching moves.

Below is a (rather long) video of the app driving the decoder on my little test setup. The blue readout is a current meter. Not pulling much here.

I have a new locomotive, a USAT GP9, that I will be putting a TCS WOW decoder into. That will get it’s own phone app, although it should look very similar to this one. I’m finding the various decoders, while all adhering to the DCC spec, are a little different in certain areas, particularly the CV programming. Also, one thing I didn’t consider is getting data FROM the decoder. I have the circuit and s/w design for that but it’s not implemented yet. That’s next.

At some point I may try to merge the various incarnations of the phone app into one, but for now I’ll be doing one for each. I plan to support the three decoders I currently have, the QSI, the Economi and the TCS Wow.

Here is a demo of the phone app. It doesn’t actually do anything, just lets you change screens and move the throttle slider etc. But I’d be interested in feedback from other train folks – Drop me an email: martan@cstone.net 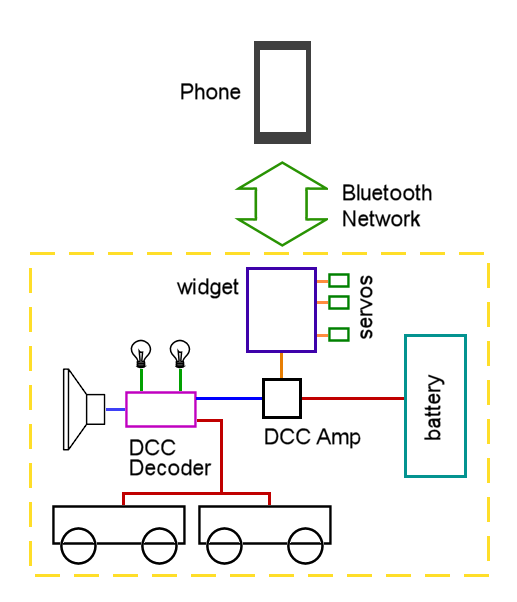