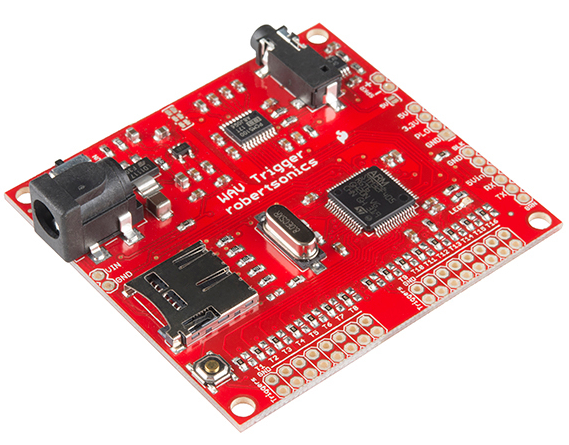 Much research and prototyping have given me a reasonable solution for two channels of MP3 sound, however a newer sound card has presented itself from Sparkfun: Wav Trigger

While more expensive, this is a far better solution. It has 8 independent tracks of sound that you can mix in real time. Each channel of sound can be loaded from a pool of up to 1000 wav files that are contained onboard the SD card. It also has a built in mono amplifier so no external inputs are required.

Also, I have a much paired down version of the single channel sound card, here is a schematic of that

After pricing some of the offerings for adding sound to a USA Trains Alco S4 locomotive, I decided that I could probably do a pretty decent approximation of a $200 sound card for fifty bucks. Here is a basic block diagram of my next project. The micro reads the R/C servo lines and parses the pulses into an on/off. That info determines which of the mp3 sound cards to play and which of the 200 sound files should be selected for each channel. The micro also controls the volume so I can feed that into a simple mixing circuit which is then output to the amp and the speaker. 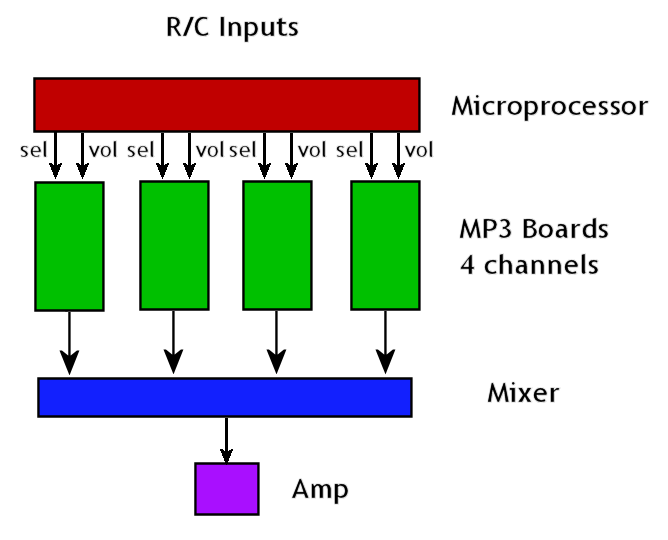 I don’t have a specific circuit diagram quite yet but I’ve settled on the mp3board, $10 each from mdfly.com

For my initial development it will be two channel system, if it works out I’ll expand to more channels. Four channels of stereo sound plus assorted parts would be about $50 cost. This card should also be quite useful for many animatronic things based on R/C servo outputs.

I’m also looking at the Microchip family of audio devices, they offer several incarnations of PIC micro controller chips designed to process and playback sound. This is a bit more effort than an off the shelf module but would be far more versatile. Future investigation.

April 28, 2012
I’ve done a bit of real world testing on this now, I chopped up an Alco RS3 sound file I got off the internet and put the parts on a SD card. Got the files to play but I think I’ll have to rethink my s/w design as there is a bit of a blip between playing one file and switching to another. I’m just doing it manual now so I’m not sure if the parallel interface will be smoother or not. I think if I just duplicate the sounds on both cards and then use the Atmel to ping-pong between them based on demand, it should work great. Four channels would be even smoother and offer overlaid sound efx too.